I am an independent data researcher, specializing in comparing original LDS documents to the Book of Mormon (BOM) text. I have spent the last seven years accumulating information and developing a home for it on the web. I also post LDS memes here daily.

Publishing some of this material in book form has created a debt I am not able to dig out of, though I give a huge THANK YOU to those who have lightened the burden by purchasing them along the way. What is most important to me means far more than money: I want everyone to have full and free access to the material whenever they need it. This is why my latest work has gone directly to the web.

As I have looked at the number of hits coming through, I have to admit that the site is not being utilized as I’d hoped. In fact, it is a bit depressing. I had people complain that I once asked for donations – stating that charging for it seemed like “money-changing,” and others who dismiss it because it is free, stating that no one will take it seriously if there is no fee. SMH. There is currently not enough interest to keep the site up, but I am convinced it is not because of the quality of the research, but more that the material is in “reference book” style and would be like reading a dictionary. Nobody wants that either! For the survival of the site and the benefit of those who utilize it, the solution is simple: I need more people to visit it. I beg you for your time.

To entice you, I will give a brief description below of each of the nine portals. Beyond that, this data is not only FREE, it is also copyright free, and the .PDFs can be downloaded and printed at home for your personal use… permission granted! This site (and LDSdefector.com) is my life’s work and I feel that once your curiosity prompts a visit, you will be fascinated by the information you’ll find.

BOOK OF MORMON COMPARATIVE: More than forty years ago, I was determined to discover the differences between the 1830 version of the BOM and the 1977 text I had in my green triple. The task was intimidating, as it was to be accomplished with a fine-tipped red marker and grit. This was several years before the advent of personal computers. Fast forward to August 2015. The LDS church publishes a transcribed volume of the Printer’s Manuscript (PM), which is a handwritten copy of the Original Manuscript (OM). The OM was penned directly from the lips of Joseph Smith. A new task unfolded. I would take the coalesced and unedited OM & PM and compare them, side-by-side, to the current edition published by the church. In keeping with my original motivation, every difference would be shown in RED type.

THE HANDWRITTEN BOOK OF MORMON: Some had asked for a version of the Book of Mormon Comparative – without the comparative part – to give as gifts to their faithful friends/family. I maintain that The Handwritten Book of Mormon (THBOM) comes closer to the words falling from the tongue of Joseph Smith than any version of the BOM previously available. The reader will find the difficult OM/PM text easier to read with sense lines, since the original manuscripts rarely utilized punctuation. It is the only book on this list that sold-out in hardback.

THE BIBLE TO BOOK OF MORMON COMPARATIVE: With 1,500+ pages, this three-volume set compares the Authorized King James Version Bible (AKJV) to the BOM. Researchers have been attempting to find the “smoking gun” book that Joseph Smith used to create the BOM. Though there are many interesting parallels in The Late War, The Golden Pot, The First Book of Napoleon, and View of the Hebrews, nothing comes remotely close to the influence of the AKJV in the BOM. Every verse of the BOM is compared to its most likely counterpart(s) from the AKJV. Granted, not every verse shows a strong influence, but in most cases the parallels are far more interesting than expected. Because of the volume of data, not every match is shown in the book, rather, this is a “best of” compilation.

BOOK OF MORMON: LIKELY SOURCES: These are all of the files I used to produce The Bible to Book of Mormon Comparative (TBTBOMC). For example, Jarom 1:4 shows only TWO comparisons in TBTBOMC, but these two were favored over a total of 1,864 possibilities. The other 1,862 can be found in Likely Sources. The data is so extensive, that each verse in the BOM had to be listed individually in its own .PDF.

ITALICS IN ISAIAH and THE ISAIAH VARIATIONS: While doing research on The Bible: King James Version and Joseph Smith’s Revision (KJV/JST), I was drawn back to the Isaiah chapters of the BOM; these are the most obvious chucks of the AKJV found in the BOM. More than 37% of italicized words in Isaiah (AKJV) were modified or removed; showing a penchant for giving these words added attention. This was the birth of Italics in Isaiah. Then, once I had finished my JST work in KJV/JST, I decided to develop a three-column comparison of the AKJV, THBOM, and the JST. The result is The Isaiah Variations, this project also includes the italics angle of Italics in Isaiah.

THE BIBLE: KING JAMES VERSION AND JOSEPH SMITH’S REVISION: The final portal on the site is the most recent project. I dissected and coalesced the various original manuscripts of the JST, including the AKJV used by Joseph and Oliver, and compared them to the AKJV Bible. Every modification and detail recorded in their earliest versions from 1830-1833 is addressed, and the ability to view these texts side-by-side is incredibly helpful in considering the intent of the changes.

I apologize if I have come on too strong in this post, but I’m concerned that there are many who have never known about these projects and can use them to help formulate their own ideas about the origin of the Book of Mormon. A huge thank you to everyone who has contributed either time, talents, or money to my efforts. My next project is a comparison of the obscure books of the Apocrypha (found in the AKJV) to the BOM. 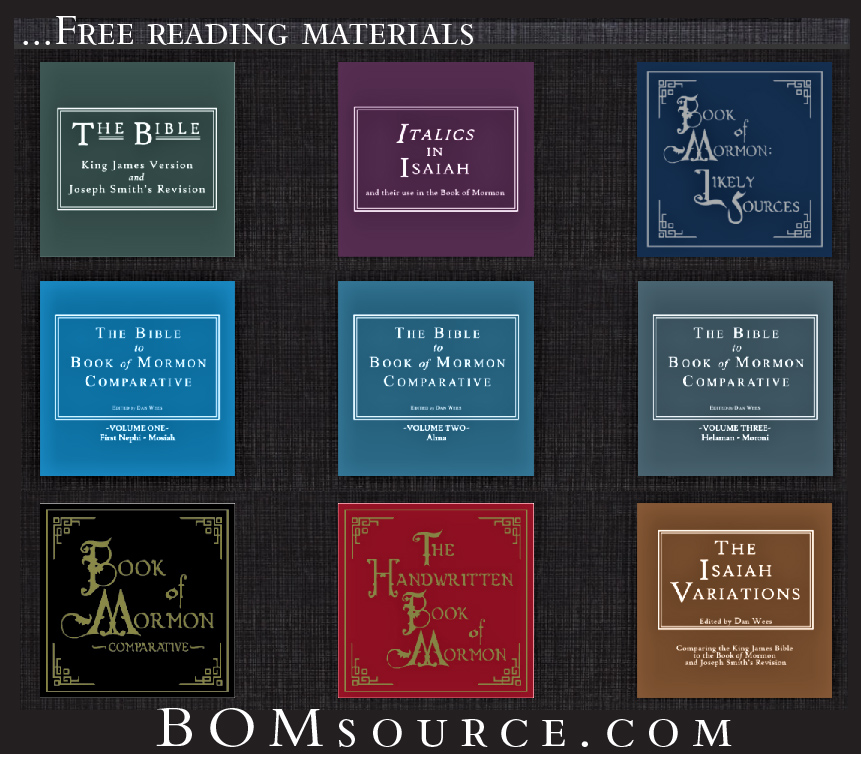