“In the year 1811, I was in the employ of Henry Lake and Solomon Spalding, at Conneaut, engaged in rebuilding a forge. While there, I boarded and lodged in the family of said Spalding, for several months. I was soon introduced to the manuscript of Spalding, and perused them as often as I had leisure. He had written two or three books or pamphlets on different subjects; but that which more particularly drew my attention, was one which he called the ‘Manuscript Found.’ From this he would frequently read some humorous passages to the company present. It purported to be the history of the first settlement of America, before discovered by Columbus. He brought them off from Jerusalem, under their leaders; detailing their travels by land and water, their manners, customs, laws, wars, &c. He said that he designed it as a historical novel and that in after years it would be believed by many people as much as the history of England. He soon after failed in business, and told me he should retire from the din of his creditors, finish his book and have it published, which would enable him to pay his debts and support his family. He soon after removed to Pittsburgh, as I understood. I have recently examined the Book of Mormon, and find in it the writings of Solomon Spalding, from beginning to end, but mixed up with scripture and other religious matter, which I did not meet with in the ‘Manuscript Found.’ Many of the passages in the Mormon Book are verbatim from Spalding and others in part. The names of Nephi, Lehi, Moroni, and in fact all the principal names, are bro’t fresh to my recollection, by the Gold Bible. When Spalding divested his history of its fabulous names, by a verbal explanation, he landed his people near the Straits of Darien, which I am very confident he called Zarahemla, they were marched about that country for a length of time, in which wars and great blood shed ensued, he brought them across North America in a north east direction.” 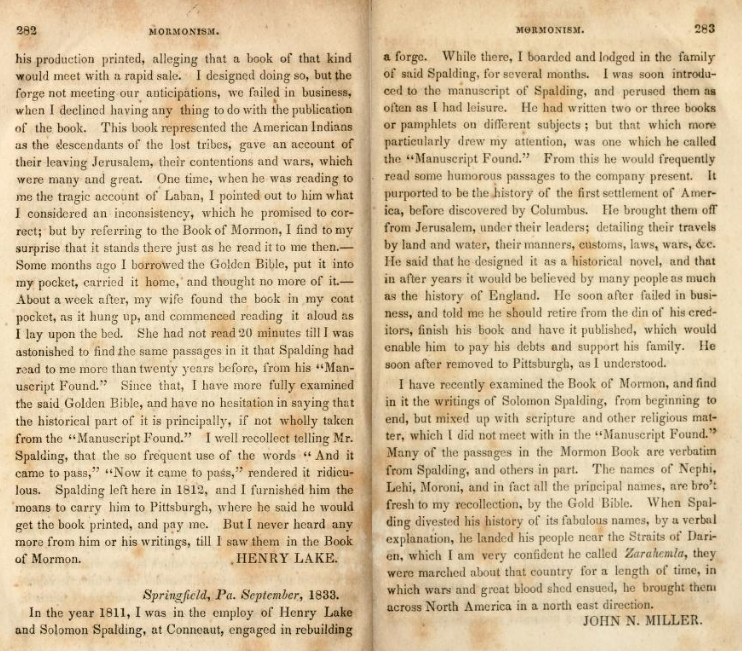