An Uncorrected Error in the Book of Mormon

“And he also read the account of Alma and his brethren, and all their afflictions, from the time they left the land of Zarahemla until the time they returned again.”

This should read “Ammon” and not “Alma.” Based on his age in the timeline, Alma would have been too young to have had experiences with “his brethren, and all of their afflictions.”

LDS scholar, Royal Skousen, acknowledges this obvious error in his 2004 work, Analysis of Textual Variants of the Book of Mormon: Volume 3. Yet, the blunder is prominently featured as part of the scriptures on the church’s website and in every variety of the Book of Mormon ever printed. Skousen maintains that the error was a simple mistake made by Oliver Cowdery in copying the text from the OM to the PM. Not a single word from the Book of Mosiah OM exists, so it’s impossible to confirm this assertion, however, it seems likely to be true.

The looming question in regard to the thousands of errors (of every variety) in the BOM, lies in the “Hand of Providence.” Why are we relegated to ‘turn a blind eye’ to simple, common errors such as spelling, punctuation, and grammar, and allow this forgiveness to extend to larger issues such as Mosiah 25:6? Would not the Hand of Providence have been extended throughout the translation and copying processes in order to deliver the ‘most correct’ book ever published to the world? Does this seem too much to ask? Evidently so, since the error is promulgated by the church nearly 200 years later. 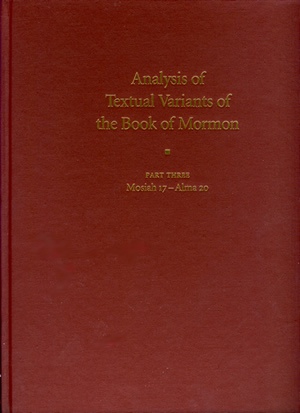