LDS Missionaries have been taught for decades that “Satan controls the waters.” There are various stories about the reasons regarding this missionary policy… which prohibits everything from swimming to certain types of bathing, to boating.

In August of 1831, Joseph Smith, with ten elders of the Church, began a journey from Independence, Missouri to Kirtland, Ohio. Joseph recorded the following about this experience in his journal:

“[M]any of the dangers so common upon the western waters, manifested themselves; and after we had encamped upon the bank of the river, at McIlwaine’s bend, Brother [William W.] Phelps, in an open vision, by daylight, saw the Destroyer, in his most horrible power, ride upon the face of the waters. Others heard the noise, but saw not the vision.”

Three days later, on 12 August 1831, Joseph Smith received the revelation identified as Section 61 in the Doctrine and Covenants. Part of that revelation refers specifically to the power of the adversary upon the waters.

“Behold, I, the Lord, in the beginning blessed the waters; but in the last days, by the mouth of my servant John, I cursed the waters. Wherefore, the days will come that no flesh shall be safe upon the waters. And it shall be said in days to come that none is able to go up to the land of Zion upon the waters, but he that is upright in heart… And now I give unto you a commandment that what I say unto one I say unto all, that you shall forewarn your brethren concerning these waters, that they come not in journeying upon them, lest their faith fail and they are caught in snares; I, the Lord, have decreed, and the destroyer rideth upon the face thereof, and I revoke not the decree… Wherefore, let those concerning whom I have spoken, that should take their journey in haste – again I say unto you, let them take their journey in haste. And it mattereth not unto me, after a little, if it so be that they fill their mission, whether they go by water or by land; let this be as it is made known unto them according to their judgments hereafter.”

The LDS Church uses water in the following sacred functions: Baptism for the living and the dead, The Sacrament, The Washing (endowment), and The Washing of the Feet (The Second Anointing).

There is not a single reference as to why water is such an elemental source in sacred ceremonies, but is under Satan’s power in others. 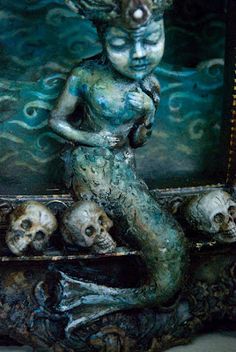