One of the defining characteristics of Mormonism has to do with its canonized code of health. Adherence to the Word of Wisdom is a prerequisite to receiving saving ordinances (temple and baptism) and disobedience is one of Mormonism’s greatest taboo-boos. Often it is distilled (pun intended) to simple prohibitions on alcohol, coffee, tea, and tobacco. Reading the entire source text of the ‘commandment’ though offers some interesting, often overlooked, insights.

#1 – It wasn’t a commandment: Not only wasn’t it a commandment, it was explicitly pointed out that it shouldn’t be a commandment. D&C 89:2 states “To be sent greeting; not by commandment or constraint…” Joseph said the 1833 revelation came directly from God, yet Brigham Young added some context that a complaint from Emma Smith about cleaning tobacco spit off the floor prompted Joseph to inquire of the lord. One account by Davis Whitmer mentioned that the addition of coffee and tea was meant as a “counter dig at the sisters.”

Adherence was loose, to say the least in the early days of the Church. Joseph Smith was known to enjoy a good cigar or glass of beer, even drinking wine the night of his martyrdom. Other church leaders did likewise for decades it seems till the early 20th century when it was made a requirement to receive a temple recommend.

#2 – Thus saith the Lord…  D&C 89:4 “Behold, verily, thus saith the Lord unto you…” This is one of the few direct revelations from the mouth of God. The question one begs to ask is, couldn’t he do better? Why not prohibit opium, laudanum, cocaine, or arsenic (commonly used in the 1800s)? Why not encourage the use of soap and promote hygienic practices, thus saving millions of lives? Why not be clearer and less interpretive in the commandment (focusing on addictive avoidances rather than specifically vague prohibitions)? Why not give anything different from what was already being talked about by other publications (Sylvester Graham, 1830 Journal of Health)? Why give useless advice (tobacco for bruises and sick cows, eating meat only in times of hunger, hot drinks)?

#3 – Alcohol is prohibited… sort of  D&C 89:3 states “That inasmuch as any man drinketh wine or strong drink among you, behold it is not good, neither meet in the sight of your Father, only in assembling yourselves together to offer up your sacraments before him.” It seems there is a caveat for sacramental wine (evidenced in historical practice) and later we learn that strong drinks are good for washing your bodies (a little weird, but just make sure you have no open wounds before your whiskey bath). Skimming down a bit we read that “[B]arley for all useful animals, and for mild drinks.” Mild barley drinks = Beer… Cheers, I guess.

Side note: Jesus drank alcoholic wine, let’s just get that out of the way. It was almost 1900 years before Louis Pasteur was able to stop fermentation through the pasteurization process. Before then grape juice would quickly ferment, producing alcohol.

#3 – Hot, Hot, Hot Chocolate  Verse 9 says, “And again, hot drinks are not for the body or belly.” The actual phrase is hot drinks, with no mention of coffee or tea. Many in Joseph’s day, including Sylvester Graham (of Graham Cracker fame), promoted hot drinks as harmful, not necessarily because of the contents but rather the temperature. Many early saints considered not only coffee and tea as prohibitive but hot chocolate, soups and even boiled water. The latter possibly leading to many deaths when dysentery and cholera swept through the Mormon settlements in the 1830s.

“[W]e must feed our children properly… We must not permit them to drink liquor or hot drinks, or hot soup.”

#4 – Where’s the beef?… Joseph used four verses to describe, somewhat painfully, the restrictions on meat (just one small verse for hot drinks) yet we almost completely ignore it as a church. Eating meat in summer will not keep you from going through the temple…Just watch out for that ol’ cup o’ Joe.

“Yea, flesh also of beasts and of the fowls of the air, I, the Lord, have ordained for the use of man with thanksgiving; nevertheless they are to be used sparingly; And it is pleasing unto me that they should not be used, only in times of winter, or of cold, or famine. All grain is ordained for the use of man and of beasts, to be the staff of life, not only for man but for the beasts of the field, and the fowls of heaven, and all wild animals that run or creep on the earth; And these hath God made for the use of man only in times of famine and excess of hunger.”

Meat restrictions and moderate consumption were gaining popularity in the early 1800s which gained shallow roots within Mormonism. The idea of only eating meat in times of winter or famine appears to be based more on folk medicine than anything with a scientific basis. For better or worse we chose to focus less on this and more on the hot drinks. Rodizio Grille good. Starbucks bad.

#5 – Cross my heart, hope to not die Thankfully the Word of Wisdom ends with a promise, something that can prove that it comes from God and not just a man (cuz God only talks to men) thing.

“And all saints who remember to keep and do these sayings, walking in obedience to the commandments, shall receive health in their navel and marrow to their bones; And shall find wisdom and great treasures of knowledge, even hidden treasures; And shall run and not be weary, and shall walk and not faint. And I, the Lord, give unto them a promise, that the destroying angel shall pass by them, as the children of Israel, and not slay them. Amen.”

Side/cynical thought. Perhaps that was why Joseph was afraid of angelic sword destruction if he failed to marry those 34 women. If he were keeping the Word of Wisdom, perhaps he wouldn’t have been afraid of the angel because of the last promise… (insert slow clap and soft chuckle).

There are quite a few words (some of which are nonsensical), but let me summarize: we are promised health, knowledge, endurance, not fainting, and something about angels not destroying us. The problem is that, though Mormons are less likely to have liver disease or lung cancer, they still get sick like everyone else. They still die of cardiovascular disease. They get bone cancer. They faint. They occasionally lack wisdom. They get struck by lightning. They have a hard time running, sometimes even walking. They experience all sorts of health maladies that directly contradict the promised blessings, aligning more with naturalistic outcomes.

What’s worse is because there is a strict, albeit basic, reduction of the revelation to avoiding specific substances… members find other outlets. Utah has one of the highest rates of opioid deaths, anti-depressant usage, and cardiovascular disease. Drinking coffee might be a sign of apostasy and keep me from essential saving ordinances required for exaltation, yet the bishop interviewing me can be 300 lbs. overweight, have a sugar addiction, drinking Red Bull yet slip into VIP heaven just fine. Weird.

Now don’t get me wrong. I am a fan of moderation and avoiding addictive/harmful substances. It’s the irrational balance of what is good and what is bad I am not a fan of. It’s the obedience for obedience’s sake (Abraham=bad parenting example). It’s the making it an issue of morality rather than one of health.

Perhaps we need to go back to the original intent and make the Word of Wisdom “not by commandment or constraint” but rather just a metaphor for healthy living. 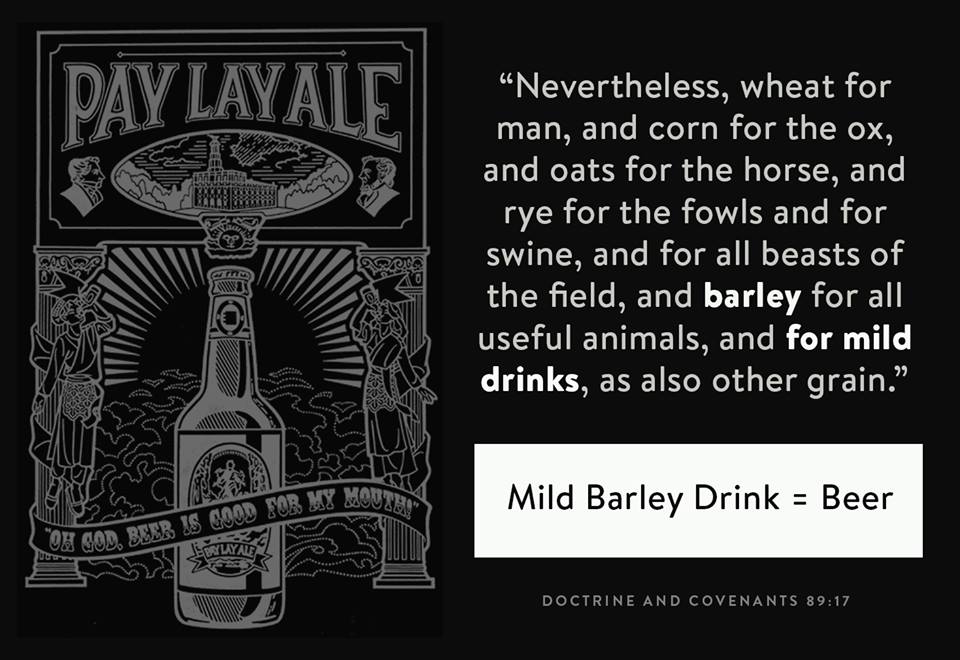