“When the day finally came to return to the hill, Joseph went alone. Without Alvin, he was unsure if the Lord would trust him with the plates. But he thought he could keep every commandment the Lord had given him.”

There was certainly a good amount of trepidation on the part of Joseph Smith in having to travel three miles to the hill on this anniversary. Exactly a year earlier, Joseph was told to bring Alvin with him on this autumnal equinox to receive the plates. There was, of course, a complication: Alvin was dead.

One must wonder about divine providence in this matter since Moroni requested Alvin’s presence, yet the young man was likely inflicted at the very moment the request was made. An imminent death was unknown to the family at that point, but wouldn’t God know? Was the angel playing dumb? Was it a divine trick?

A bizarre episode was about to unfold. One that was conveniently left unaddressed in this new history.

Joseph “thought he could keep every commandment the Lord had given him.” But wasn’t one of those to bring Alvin along? Could the wisdom of the almighty and the trust the angel demanded of him, include dragging Alvin’s corpse to Cumorah?

“Apparently, word had circulated of Joseph’s instructions [from the angel], and the false rumor was being spread that the Smiths had dug up – or would dig up – the corpse to fulfill the instructions.”

The antics of the Smith family were well known in the area, and the public would put nothing past them. Accordingly, to silence the critics, the Smith family had Alvin’s body exhumed on 25 September 1824. Joseph Smith, Sr. felt inclined to publish his findings four days later in the local newspaper:

“TO THE PUBLIC. Whereas reports have been industriously put in circulation that my son Alvin had been removed from the place of his interment and dissected; which reports… are peculiarly calculated to harrow up the mind of a parent and deeply wound the feelings of relations… therefore, for the purpose of ascertaining the truth of such reports, I, with some of my neighbors this morning, repaired to the grave, and removing the earth, found the body, which had not been disturbed. This method is taken for the purpose of satisfying the minds of those who may have heard the report, and of informing those who have put it in circulation, that it is earnestly requested they would desist therefrom.”

Alvin had been dead for nearly a year. Why would the Smith’s feel the need to exhume the body, to be certain the grave was occupied, if the dirt/grass around the site was undisturbed?

Did they, in fact, take Alvin’s body to the hill?

RE-rewrite: “When the day finally came to return to the hill, Joseph knew he didn’t do as the angel directed. Without Alvin, he was unsure if the Lord would trust him with the plates. But he thought he could keep every commandment the Lord had given him, and so…” 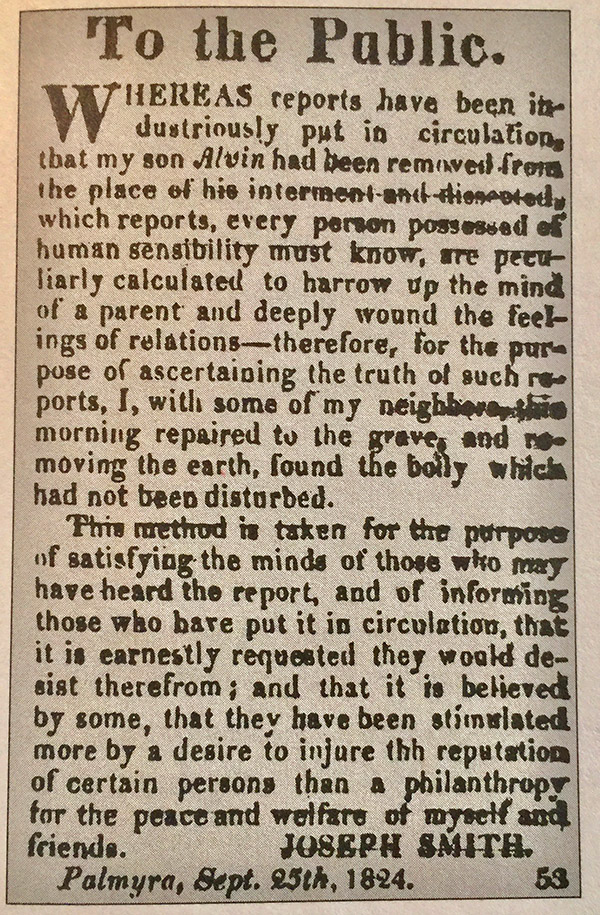