“Folktales of the treasure feats of Captain William Kidd (1645-1701), and their likely influence upon Joseph Smith Jr., have previously been argued and written during the last several decades. While the topic is not new, circumstantial evidence linking the two men is accumulating. This article is not the last word on the subject, but rather an effort to clarify where things presently stand. Let us start by discussing the Joseph Smith family’s efforts at treasure seeking on Cumorah hill.

“Fifty-one of Palmyra’s leading citizens said the Joseph Smith Sr. family was ‘famous for visionary projects.’ One of these projects centered on a nearby glacial drumlin, called Cumorah hill by the Smiths. Neighbor Orsamus Turner said it was ‘legends of hidden treasure,’ and Book of Mormon witness Martin Harris said it was ‘money supposed to have been hidden by the ancients’ that drew the family to the hill. From 1820-27, Smith and his father were digging at and claiming to have experiences with the hills spirit guardian (later called Moroni), according to Palmyra/Manchester residents Orsamus Turner, Martin Harris, Pomeroy Tucker, Willard Chase, and Orlando Saunders – all providing detailed accounts. Before, during, and after the golden plates saga, the Smiths were engaged in looking for Cumorah’s treasures.

“One of the ‘legends of hidden treasure’ that would have drawn the Smith family to Cumorah hill was the treasure adventures of Captain William (a.k.a. Robert) Kidd, the pirate. Pomeroy Tucker, who was essentially the same age as Smith, said Joseph ‘had learned to read works of fiction and records of criminality, such for instance as would be classed with the dime novels of the present day. The stories of Stephen Buroughs and Captain Kidd, and the like, presented the highest claims for his expanding mental perceptions.’ Another Palmyra native, Philetus Spear, said that Joseph Smith as a boy ‘had for a library a copy of the Arabian Nights, stories of Captain Kidd, and a few novels.’ According to James H. Kennedy, Joseph Sr. while living in Vermont had ‘at times engaged in hunting for Captain Kidd’s buried treasure,’ and that young Joseph’s own reading about the pirate had ‘made a deep impression on him.’ Palmyra resident Ann Eaton added that Kidd was ‘his hero.’ Joseph may have read Washington Irving’s short story on the adventurous life of Kidd The Pirate, which was published in Philadelphia in 1824 and in New York in 1825. More likely, Joseph and his family had read several of the many exaggerated dime novel knock-offs about Kidd and other pirates which were based on the 1724 and 1728 popular two volumes, A General History of Robberies and Murders of the Most Notorious Pyrates, by Daniel Defoe.

“Joseph Smith not only read about the Kidd treasure legends in his boyhood but dug for them at various locations. Stephen Harding a one-time governor of Utah Territory, and Palmyra native said that Joseph, ‘had spent his time for several years… digging for hidden treasures, and especially for pots and iron chests of money, supposed to have been buried by Captain Kidd.’ Early convert to Mormonism and Smith neighbor, Porter Rockwell, informed Elizabeth Kane, the ‘treasure[s] of Captain Kidd were sought for far and near, and even in places like Cumorah.’ Rockwell knew this to be true because he, Martin Harris and perhaps Joseph Jr. had sought treasure at Cumorah hill in 1827. William R. Hine of Windsor, New York, heard from young Joseph that:

He [Joseph] saw Captain Kidd sailing on the Susquehanna River during a freshet, and chat he buried two pots of gold and saver. He claimed he saw writing cut on the rocks in an unknown language celling where Kidd buried it, and he translated it through his peepstone… [and then] dug for Kidd’s money, on the west bank of the Susquehanna, half a mile from the river.

“Likewise, Ketchel Bell remembers being told by her brother Milo, that ‘he knew Jo[seph] Smith when he was digging near the Susquehanna River for Capt. Kidd’s Money. Jo[seph] had a peep-stone through which he claimed to see hidden or buried treasures.’ It is noteworthy to observe here that even though Joseph Smith claimed detailed information on how to find this (Kidd’s) treasure, he never found it.

“During the early nineteenth century, the Smith family was not unique in seeking Kidd’s reported lost treasure. John Hyde Jr. wrote in 1857 that ‘it was quite common in the western part of New York, about thirty years ago [i.e. 1827], for men to dig for treasure which they supposed had been hidden by Captain Kidd and others.’ This activity was commonplace enough that Palmyra’s Wayne Sentinel reprinted a piece from the Windsor (Vermont) Journal, noting how prevalent seeking Kidd’s treasure was among New Englanders and Palmyra citizens in 1825:

We are sorry to observe, even in this enlightened age, so prevalent a disposition to credit the accounts of the marvelous. Even the frightful stories of money being hid under the surface of the earth, and enchanted by the Devil or Robert Kidd (Captain Kidd), are received by many of our respectable fellow citizens as truths.

“Captain William Kidd was born c.1645 and was a British sea captain. By 1690, Kidd was living in the colony of New York where he resided until 1699. It was especially during this decade that the Indian Ocean was ‘swarming with pirates,’ noted B. F. De Costa. In September, 1696 Captain Kidd raised a crew of eighty-four men in New York, and then sailed to the Indian Ocean. Throughout 1697-98, he spent considerable time in the Comoros Islands and the Indian Ocean, seizing booty from the French and other ships. Shortly after he returned to New York in 1699, he was arrested for killing one of his crew members named Moore and illegally capturing a treasure ship called the Quedagh Merchant – both incidents occurring while Kidd was in the Comoros in 1697-98. He was returned to England in 1700 where he was tried, found guilty, and executed on May 23, 1701. Soon after his arrest, a small quantity of booty, believed to be his, was found on Gardiners’ Island, off the east coast of Long Island, New York. Since that time people have been looking for the rest of Captain Kidd’s buried treasure.

“Professor Ronald Huggins has written: ‘The fact that the pirate [Kidd] was hanged for crimes allegedly committed in the vicinity of Moroni on Grand Comoro [Island] is significant.’ For example, the words Cumorah and Moroni are unusual names, yet are often used in the same sentence by many of the churches based on the movement started by Joseph Smith Jr., when describing the origins of the Book of Mormon. Church members are generally unaware and surprised to learn that off the eastern coast of Mozambique, Africa is the Comoros Islands. Today the spelling has been standardized but this has not always been so. An 1808 map of Africa refers to these Islands as Camora.

“It is interesting that a copy of the original Book of Mormon manuscript, called the Printer’s Manuscript, written in 1829-30, reveals three different spellings for this place-name. In Mormon 6:2, Camorah appears once; In Mormon 6:5, 11, Comorah is twice seen; and in Mormon 6:2, 4, 6; 8:2, Cumorah is found six times. In the first published edition of the 1830 Book of Mormon, all nine references are spelled Camorah. Still, the name itself is more important than slight variant spellings.

“Furthermore, the largest city and capital of the Comoros today is the ‘city of Moroni,’ located on Grand Comoro, the largest of the three main Islands. Moroni was founded by Arabic settlers in the tenth century AD, and like Camora/Comoro, is an Arabic name. A second Moroni place name, spelled Meroni, is on Anjouan, the second largest Comoro Island (historically known as Johanna). Meroni appears on a 1748 map of Anjouan/Johanna, as an anchorage point for the village. There are five ports on this island and three of them are within less than ten miles, increasing the likelihood of Kidd’s knowing about and visiting Meroni.

“Historian Paul Hawkins has concluded from his extensive research that Captain William ‘Kidd… seems to have known and been very familiar with the islands of the Comoros, [and] the ports of call.’ We specifically know that Kidd visited Anjouan/Johanna at least once or twice during March/April of 1697 alone. In a July 7, 1699, letter, Kidd wrote that he ‘sailed for the island of Johanna… arrived there about the eighteenth Day of March… and stayed about four days.’ Then after sailing for a day, he arrived in nearby Mohilla where he remained a month. His crew was sick and ‘about fifty men died’ on the island. One crew member named Bradinham, testified under oath at Kidd’s trial in 1701, that they sailed ‘to Madagascar, from thence to Joanna, from thence to Mahala [Mohilla], from Mahala to Joanna again.’

“Both the Camora/Comoros Islands and the two Moroni place names, were commonly associated with pirates and treasure hunting ventures in that part of the world—the very area of Captain Kidd’s greatest adventures. Moreover, twenty other pirate ships, plus New England whalers also visited the Comoros during that era. Unquestionably, people heard the oral reports of these crew members’ journeys. Captains of these ships and crew members were undoubtedly familiar with these islands and their ports. Ships would be drawn to the Moroni settlements because both had ports or anchorage. All of these pirate exploits would be particularly interesting to treasure hunters such as the Joseph Smith family.

“In short, many of Kidd’s most dramatic pirate adventures occurred, as Huggins summarized: ‘in the vicinity of Moroni on Grand Comoro’/Camora; and Joseph Smith’s adventures of Moroni are on a hill in the ‘land of Camorah,’/ ‘Comorah,’/ ‘Cumorah.’ Did the Smith family refer to the hill near their home as Camorah, Comorah, or Cumorah and its treasure guardian as Moroni, because to them these words were synonymous with treasure seeking and hidden treasure? Is it a mere coincidence that the original 1830 Book of Mormon and the Printer’s Manuscript contain the Camorah and Comorah spelling—spellings found on maps of that era?

“It is reasonable to assert that Joseph Smiths hill in the ‘land of Camorah’ [Comorah/Cumorah], ‘city of Moroni,’ and ‘land of Moroni,’ is connected with the ‘ilhas [islands] de Comoro’/’Camora,’ the Moroni/Meroni settlements, and these pirate adventures. It should not surprise us to find these place names of the Comoros in the Book of Mormon. Joseph Smith was skillful at using sources from one setting then applying the material to another place and time in clever and unique ways. For instance, it is evident that Smith drew many names, quotations, miracles, prophecy, and stories from the King James Bible as plainly seen in the Book of Mormon. He used the Apocrypha, evangelical Protestant doctrines, Methodist camp meeting traditions and ways, American antiquities, anti-Masonic rhetoric and practices, and family dreams and biographical material—all clearly seen in the text of the Book of Mormon. Smith’s pattern is further appreciated in the Book of Abraham in his appropriations from the works of Flavius Josephus, biblical quotations, and Newtonian astronomy—all from the early nineteenth century.”

See also for maps and footnotes. 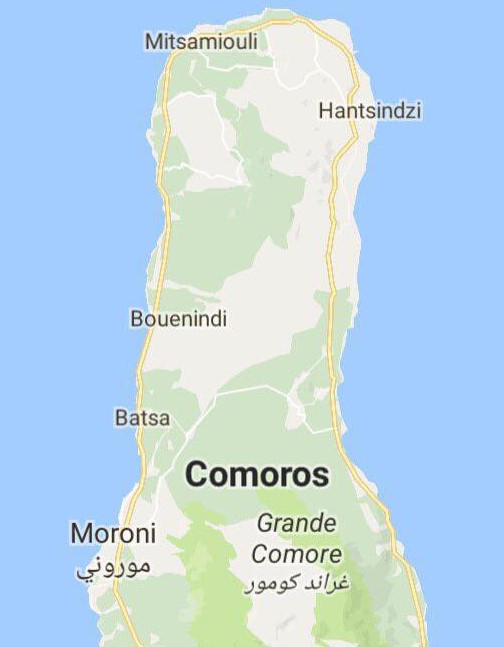