“My object in going to inquire of the Lord was to know which of all the sects was right, that I might know which to join. No sooner, therefore, did I get possession of myself, so as to be able to speak, than I asked the Personages who stood above me in the light, which of all the sects was right (for at this time it had never entered into my heart that all were wrong) – and which I should join.

“I was answered that I must join none of them, for they were all wrong; and the Personage who addressed me said that all their creeds were an abomination in His sight; that those professors were all corrupt; that: ‘they draw near to me with their lips, but their hearts are far from me, they teach for doctrines the commandments of men, having a form of godliness, but they deny the power thereof.’

“He again forbade me to join with any of them; and many other things did he say unto me, which I cannot write at this time. When I came to myself again, I found myself lying on my back, looking up into heaven. When the light had departed, I had no strength; but soon recovering in some degree, I went home. And as I leaned up to the fireplace, mother inquired what the matter was. I replied, ‘Never mind, all is well – I am well enough off.’ I then said to my mother, ‘I have learned for myself that Presbyterianism is not true.’ It seems as though the adversary was aware, at a very early period of my life, that I was destined to prove a disturber and an annoyer of his kingdom; else why should the powers of darkness combine against me?…” 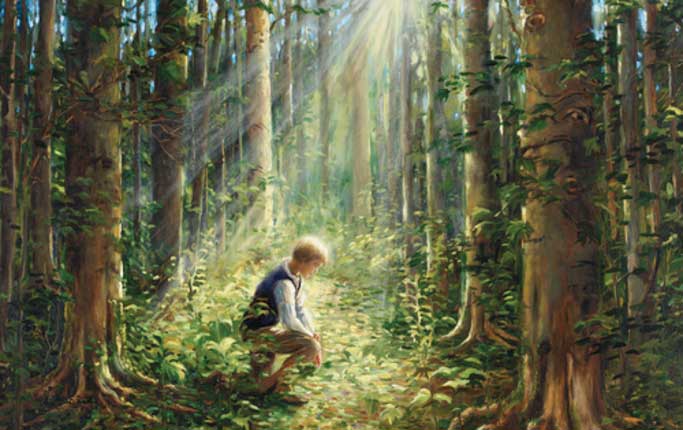