After the ‘anti-banking’ debacle, “[t]he dissenters left, but they weren’t happy about it. They went to neighboring towns, complaining that their property had been stolen by the Mormons and that they had been cast out of their homes—all of which got the people of Missouri worried. The Mormon population was getting big enough that they had political power, and this seemed like proof that they were dangerous. The first real violence came on election day in the town of Gallatin. When Mormons came out to vote, the populace got worried. One person called out that Mormons shouldn’t be allowed to vote. Soon, the town erupted into a fistfight. It got worse. A group of Mormons found a stack of logs, picked them up, and started beating people to death. The Missourians fled, but they swore that they would kill every Mormon in the county before the week ended.”

Mark Oliver, “Mormons And Missourians Beat Each Other To Death With Logs” (listverse.com blog, 29 August 2016), #8. 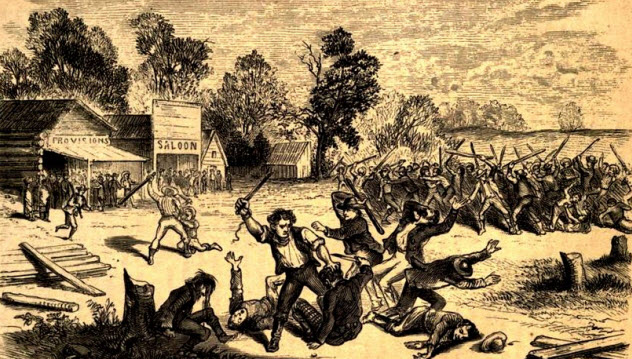