It has now been more than three decades since major changes were made in overhauling the LDS temple ceremony. Two of the most significant changes had to do with the portrayal of Christianity & the penalties associated with the name and sign.

In its 21st century bid to become more mainstream & less cult-like, the Church eliminated the portion of the temple ceremony which portrayed a Christian minister in league with (and employed by) Satan. In considering political correctness, we can all see the wisdom in such a change. As with the rest of what follows, it is mentioned to give a proper perspective of the historical church’s disgust with Christian teachings prior to its arrival.

Since being baptized as a convert at the age of fifteen in 1975, I can personally attest to the bigotry and disdain members and leaders of the faith felt toward Christian religions. This is something which can be easily researched and was certainly not limited only to the 19th Century. Yes, in what was a significant portion of the endowment ceremony, Christianity was portrayed as being satanic.

To those who attended these rituals before 1990, the baseness of these statements is haunting. To those who came later, they seem unbelievable.

Prior to 1990, the threat of death for revealing what you heard in the temple was very real. Although few 20th century folk felt that our blood would be spilled by the leadership, we felt the ominous presence of God upon our shoulders and the commitment to secrecy lest we be struck down, “For God will not be mocked.” I’d venture a guess that even the passing mention of this topic is not only difficult for some to read, but, many of those who have long since left the church will still not speak of these things because of the dark power of influence the church held on us.

The second, and what I feel is a more significant change in the ceremony, was the elimination of the third part of the phrase “Name, Sign, and Penalty” altogether. I believe the term “penalty” may still be used in the ceremony surreptitiously; but without details. I cannot begin to tell you how many people have confessed the fear and eventual nightmares they had because of the gruesome nature of the penalties. There can be no doubt these were introduced into the temple originally to breed fear, intimidation, and unquestioning obedience; and it worked.

For those unfamiliar with it, during the physical display of the “sign,” a follow-up action was required; the execution of the penalty. The phrase was announced: “I will never reveal the first token of the Aaronic priesthood, with its accompanying name, sign, and penalty. Rather than do so [at this point the right hand was moved from ‘the square,’ across the face with the right thumb under the left ear lobe], I would suffer my life to be taken.” As these last six words were pronounced, all patrons were required to swiftly draw the thumb across the throat to the right ear lobe; as a representation of having your throat slit for the guilt of revealing this part of the ceremony. Later in the session, similar rituals would be performed representing vivisection and disembowelment.

How has this horrid detail been kept from the faithful? In simply this way: You’re not allowed to speak about what happens in the temple, so everyone post-1990 would never realize what the ceremony was like before. Only if a friend or family member would whisper to them, “Here’s the juicy part where you used to act like you were cutting your throat” (which would probably happen ‘never’) would they have any idea about it. That is, until the internet. 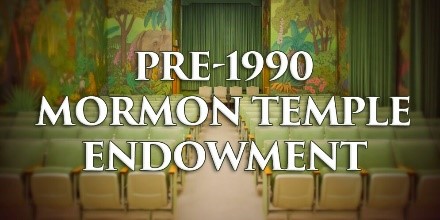