On the third day after Jesus’ death, the women go to the tomb to anoint his body for burial, and whom do they see?

Do they see a man, as Mark says, or two men (Luke), or an angel (Matthew)? This is normally reconciled by saying that the women actually saw two angels. That can explain everything else—why Matthew says they saw an angel (he mentions only one of the two angels, but doesn’t deny there was a second), why Mark says it was a man (the angels appeared to be men, even though they were angels, and Mark mentions only one of them without denying there was a second), and why Luke says it was two men (since the angels appeared to be men).

The problem is that this kind of reconciling requires one to assert that what really happened is unlike what any of the Gospels say—since none of the three accounts states that the women saw two angels. 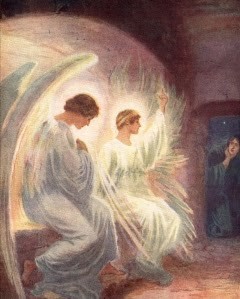