“And Isaac dwelt in Gerar: And the men of the place asked him of his wife; and he said, She is my sister: for he feared to say, She is my wife; lest, said he, the men of the place should kill me for Rebekah; because she was fair to look upon. And it came to pass, when he had been there a long time, that Abimelech king of the Philistines looked out at a window, and saw, and, behold, Isaac was sporting with Rebekah his wife. And Abimelech called Isaac, and said, Behold, of a surety she is thy wife: and how saidst thou, She is my sister? And Isaac said unto him, Because I said, Lest I die for her. And Abimelech said, What is this thou hast done unto us? one of the people might lightly have lien with thy wife, and thou shouldest have brought guiltiness upon us. And Abimelech charged all his people, saying, He that toucheth this man or his wife shall surely be put to death. Then Isaac sowed in that land, and received in the same year an hundredfold: and the Lord blessed him. And the man waxed great, and went forward, and grew until he became very great: For he had possession of flocks, and possession of herds, and great store of servants: and the Philistines envied him.” 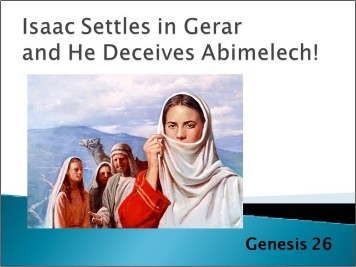