“[T]he Negro race, the lowest in intelligence and the most barbarous of all the children of men. The race whose intellect is the least developed, whose advancement has been the slowest, and who appear to be the least capable of improvement of all people. The hand of the Lord appears to be heavy upon them, dwarfing them by the side of their fellow men in every thing good and great.

“[H]e looks as though he has been put in an oven and burnt to a cinder before he was properly finished making. His hair baked crisp, his nose melted to his face, and the color of his eyes run into the whites. Some men look as if they had only been burned brown; but he appears to have gone a stage further, and been cooked until he was quite black.” 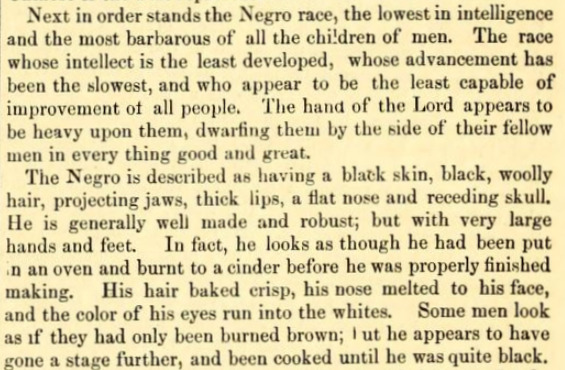