“I went to the city of New York, and presented the characters which had been translated [by Joseph Smith, Jr.], with the translation thereof, to Professor Charles Anthon, a gentleman celebrated for his literary attainments. Professor Anthon stated that the translation was correct, more so than any he had before seen translated from the Egyptian. I then showed him those which were not yet translated, and he said that they were Egyptian, Chaldaic, Assyriac, and Arabic; and he said they were true characters. He gave me a certificate, certifying to the people of Palmyra that they were true characters, and that the translation of such of them as had been translated was also correct. I took the certificate and put it into my pocket…”

“The whole story about my having pronounced the Mormonite inscription to be ‘reformed Egyptian hieroglyphics’ is perfectly false… Upon examining the paper in question, I soon came to the conclusion that it was all a trick, perhaps a hoax… This paper was in fact a singular scrawl. It consisted of all kinds of crooked characters disposed in columns, and had evidently been prepared by some person who had before him at the time a book containing various alphabets. Greek and Hebrew letters, crosses and flourishes, Roman letters inverted or placed sideways, were arranged in perpendicular columns, and the whole ended in a rude delineation of a circle divided into various compartments, decked with various strange marks, and evidently copied after the Mexican Calendar given by Humboldt, but copied in such a way as not to betray the source whence it was derived. I am thus particular as to the contents of the paper, inasmuch as I have frequently conversed with my friends on the subject, since the Mormonite excitement began, and well remember that the paper contained anything else but ‘Egyptian Hieroglyphics.’” 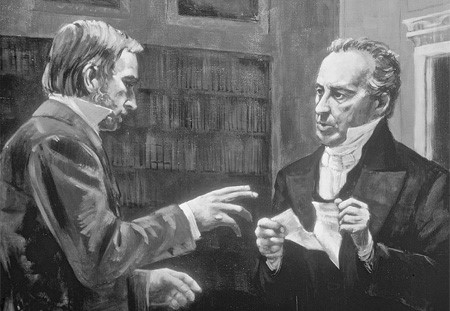