One of Royal Skousen’s arguments against the authenticity of the “Chicago Leaves” has to do with the use of “Lamunites” in the text of Alma 3:20, since it seems admittedly uncharacteristic.

However, what makes this instance slightly less odd is this: If we adopt the accepted notion that Mosiah was the first book penned, and the introduction of the Lamanites came at the END of the translation (1 Nephi), then the use of the word Lamanite(s) is first introduced in Mosiah 7, and used sparsely until the ending chapters of Mosiah. Unfortunately, we cannot compare the Book of Mosiah to the OM, since not even a single word survived.

Alma 3:20 is found on page 177 of the PM. Note that the word “Lamanites” is followed by the same word, then struck-through. Normally, if a word is struck-through, the corrected word either follows it immediately, or is inserted with a caret mark. It is possible that this is the ONLY instance of a strikethrough AFTER it is spelled correctly in the PM. If we are supposed to rely on the transcription on the JSP site, then both words are “Lamanites” – no caret mark, and struck through only in the latter word.

The notion that a strikethrough word is located after the correct word is bizarre enough, but add to this the fact that the second word is not just simply struck through, it is struck through THREE times – essentially “boxing” the word in for some reason. This MUST have had some significance to Scribe 2, and my assumption at this point is that this is identifying the error in the OM by projecting something like “The word ‘Lamunites’ is incorrect in the OM and should be ‘Lamanites’ as it is shown in the word before this one.” It seems difficult to dismiss the presence of this occurrence in the PM as being insignificant, particularly when we know from the Chicago Leaves that it was spelled with a “u” in this very same word in the verse…the triple strikethrough in the PM was used for a reason.

Additionally, on page 293 of the PM (for Alma 49:21), the word “Nephites” is inserted to correct the error of “Lamanites.” It is entirely possible the  letter “a” is actually a “u”; just above that line the word “Lamanites” appears to have had the “u” modified so it reads as an “a”.

LESS CONVINCING: If we are to somewhat dissect the second word (as shown in the picture here), and assume the letter is actually a “u” then we could think that there is a slight flourish on the right stem of the “u”… or … that Scribe 2 used a technique to identify the error by attaching a circle to the bottom of the upper strikethrough line – a code, if you will. This seems like a stretch, but until another theory is given, it seems like it is at least plausible.

Regardless, the purpose of a strikethrough AFTER the correct word is a significant mystery, and requires research into its purpose, if not as a marker for an error in the OM. 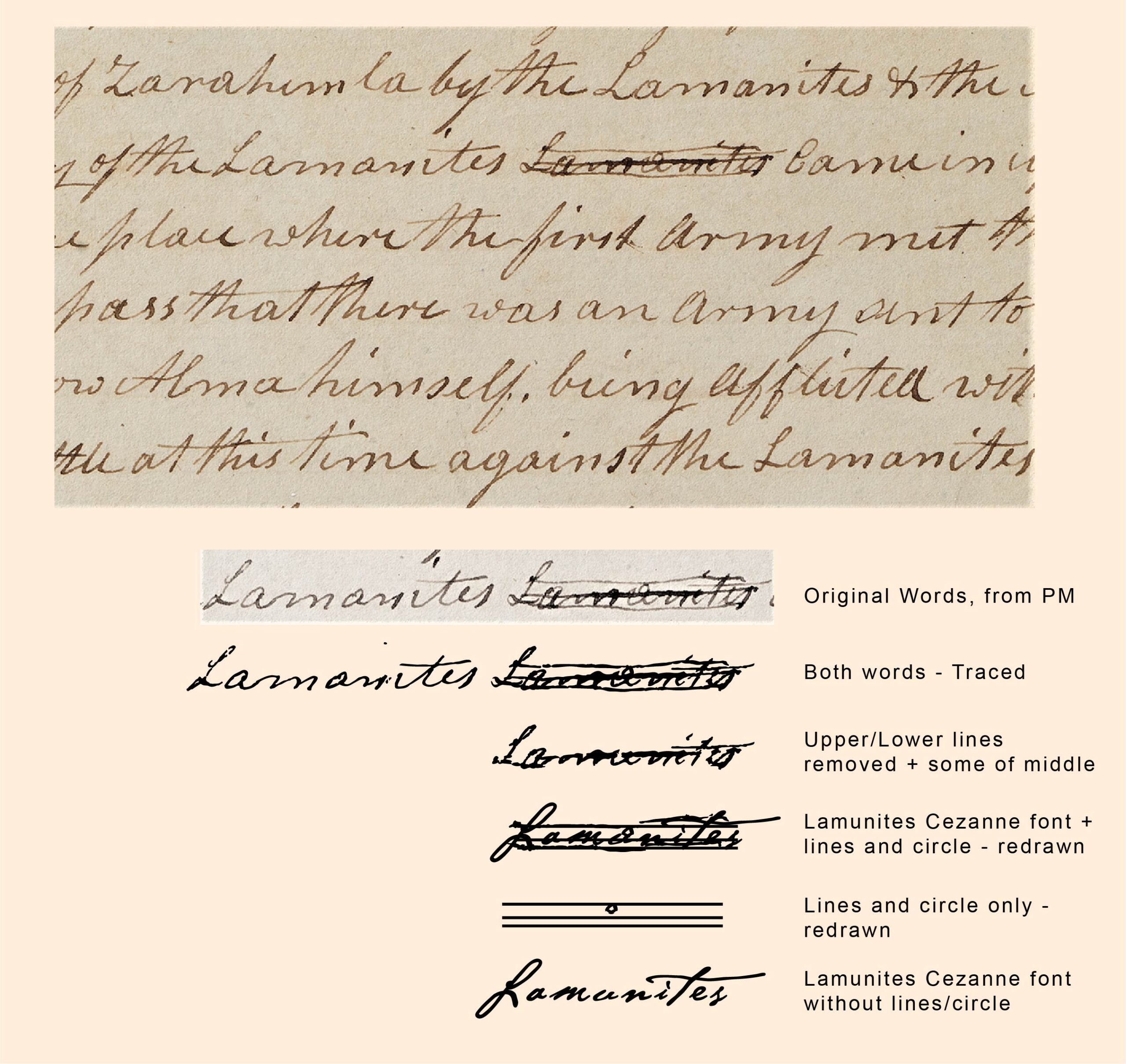