In 1881, President Joseph F. Smith (son of Hyrum Smith and, then, second councilor in the first presidency) spoke in great detail concerning the translation of the Book of Mormon. His emphasis was placed in several areas, 1) he admits that Joseph Smith, Jr. did NOT write the words in his own style of English. 2) as opposed to an opaque ‘seer stone’ (as we now know he used) he utilized the spectacle-like Urim and Thummim which had two white stones, 3) he claimed the plates were opened before him during the process, and 4) precision was used in translating, so that full sentences and individual words were verified before moving on:

“Saturday Feb. 26th 1881 I went to Provo to a quarterly Stake Conference. Heard Joseph F. Smith describe the manner of translating the Book of Mormon by Joseph Smith the Prophet & Seer, which was as follows as near as I can recollect the Substance of his description. “Joseph did not render the writing on the gold plates into the English language in his own style of language as many believe but every word & every letter was given to him by the gift & power of God — So it is the work of God & not of Joseph Smith, and it was done in this way, — With the Plates given him was an instrument called “Urim and thummim” prepared by the hand of God for that very use & kind of work, made of two white stones set in a silver bow something <like> spectacles, but the stones were wider apart & fastened <to> a heavy kind of caseing of silver. With the gold Plates open before him & these stones before his eyes and a scribe by his side to write the words he should utter; the Lord caused each word spelled as it is in the Book to appear on the Stones in short sentences or words, and when Joseph had uttered the sentence or word before him & the Scribe had written it properly, that sentence would disappear & another appear. And if there was a word wrongly written or even a letter incorrect the writing on the Stones would remain there. Then Joseph would require the Scribe to spell the reading of the last spoken & thus find the mistake, & when corrected the sentence or word would disappear as usual. The Plates were about 8 inches wide and 6 or 7 inches long so that they were wider, as books generally open, than long. The plates 8 inches by 6 or 7 were wider than long. were about 4 inches thick & weighed 60 lbs. About one half the Plates or book, was sealed and the edges appeared solid as the edge of a board.”

The Wednesday after this presentation, a Provo newspaper confirmed the information in Oliver B. Huntington’s journal.

“PRESIDENT JOSEPH F. SMITH addressed the congregation lengthily, interestingly and powerfully. Referred to the intended publication of a concordance in connection with the Book of Mormon. Such a book will be considerable benefit to missionaries, both at home and abroad. Bible concordances had proven of great benefit in biblical researches, in enabling the student to readily and correctly refer to passages for immediate use. Such an aid in connection with the Book of Mormon would be found equally advantageous to the missionary __ Book of Mormon student.

“The Book of Mormon presents the principles of the Gospel to the reader with more plainness than even the Bible, the latter book having under gone numerous charges and interpolations by uninspired men, each version being altered and arranged to accord with the views of those who have periodically undertaken to re-translate or re-compile its several Gospels. The Book of Mormon has not been translated by the power or wisdom of man. The Prophet Joseph had no worldly book learning, or understanding of the original language in which it was written untill the key of interpretation was given him by the Almighty. Joseph, as we all know, when a boy was uneducated, was no linguist, nor was he familiar with what are called the dead languages, for the language on the plates was one of what we may term the dead languages, as there was no key or learning possessed by men to interpret the language on those plates from which the Book of Mormon was translated. By means of the Urim and Thummim, the Almighty caused Joseph Smith to make the translation; thus it was that the Book of Mormon was translated by the power of God. Some persons have thought ____ revealed to Joseph the ideas, and that Joseph conveyed those ideas into the English language. But this was not so. The Lord gave not only the ideas but the language itself—the very words.

“When Elder Orson Pratt and the speaker called on David Whitmer—the only surviving one of the three witnesses named in the Book of Mormon, that person took pains to explain the method by which Joseph was enabled to make the translation. The Urim and Thummim was the instrument by which, with the Inspiration of the Almighty, the translation was made. The Urim and Thummim might have been like any other stone or pebble to Joseph without the inspiration of the prophets and seers. This instrument resembled a pair of spectacles, with two transparent stones. Joseph looked into them and the Lord caused the language to appear, so that he, uneducated as he was, could pronounce the words while Oliver Cowdery wrote them down. When one sentence was read and written down, it would disappear, giving place to another sentence, which was imparted to paper in like manner; and so they proceeded, word by word. When anything wrong recurred during the work of translating, the words on the stone would remain stationary, then they would go back and perhaps find a word had been omitted by the amanuensis; as soon as the error was detected and the word inserted, then the translation proceeded. Those witnesses to the divine authenticity of the Book of Mormon testified to the translation of this Divine work, that they had examined the golden plates and handled them with their hands as I now handle this book (the Bible). The plates were eight inches long, six inches wide and when closed as a book were four inches thick. We were also told by this witness that the plates weighed sixty pounds; that was the weight of the Book of Mormon before its translation. It was fastened by two rings which were shaped like a D, so that when leaves were closed, they would close square.”

The newspaper reported the two stones for the spectacles were transparent as opposed to white as Huntington reported, but neither as opaque as were actually used.

With such vivid descriptions, one could hardly doubt the translation of the Book of Mormon was not only EXACT, but also under the supernatural guidance of God, and therefore not in error in any way. One could also argue that grammar and punctuation would be perfect, if the translation went through such rigor before being recorded on paper.

Accepting the supernatural basis listed above, how is it that ANY changes have been made from the original manuscripts without compromising the divine process? Indeed, six years after the 1830 publication of the first edition Book of Mormon, Joseph Smith attacked the Printer’s Manuscript with his quill to make hundreds of modifications for upcoming editions. 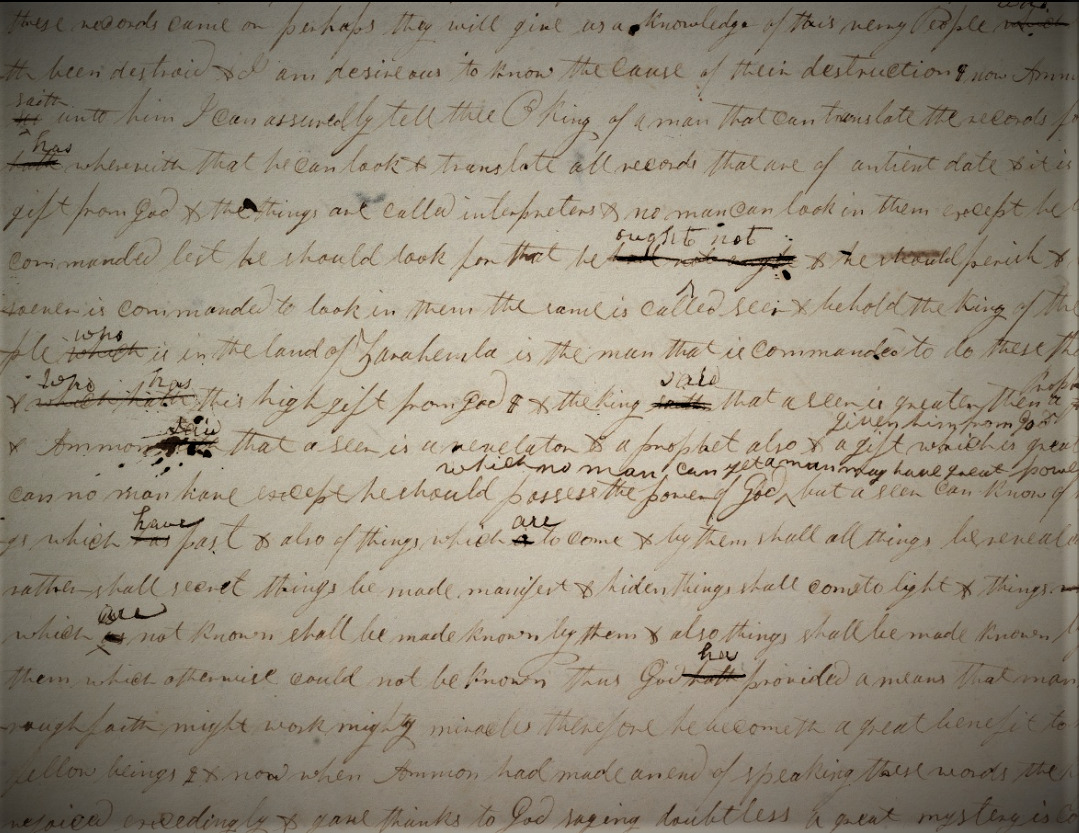