Joseph Smith gives advice, which is rarely followed strictly by Mormons, and is certainly not emphasized by early 21st century LDS authorities:

“Yea, flesh also of the beasts and of the fowls of the air, I, the Lord, have ordained for the use of man with thanksgiving; nevertheless they are to be used sparingly; and it is pleasing unto me that they should not be used, only in times of winter, or of cold, or famine.” ~D&C 89:12-13~

“The Word of Wisdom states that meat should not be eaten, except ‘in times of winter, or of cold, or famine.’ From 1898 to 1901, church president Lorenzo Snow repeatedly emphasized the importance of eating meat sparingly, teaching that church members should refrain from eating meat except in case of dire necessity, and should be seen in light of Joseph Smith’s teaching that animals have spirits. Apostle George Teasdale taught the same thing, and held that eating pork was a more serious breach of the Word of Wisdom than drinking tea or coffee. Compliance with this injunction has never been made mandatory. When Joseph F. Smith succeeded Snow as president of the church in 1901, the emphasis on refraining from meat was dropped. An official church publication states ‘[m]odern methods of refrigeration now make it possible to preserve meat in any season.’” ~en.wikipedia.org/wiki/Word_of_Wisdom~

Generally speaking, Mormons are moderate-to-heavy meat eaters and ardent hunters; many times justifying their militant actions toward animals by claiming they need the meat; or ‘thinning the herd.’ Their expenses usually outweigh the benefit of the meat they claim, and their love of the hunt is proudly displayed in living room ‘racks’ and bumper stickers. 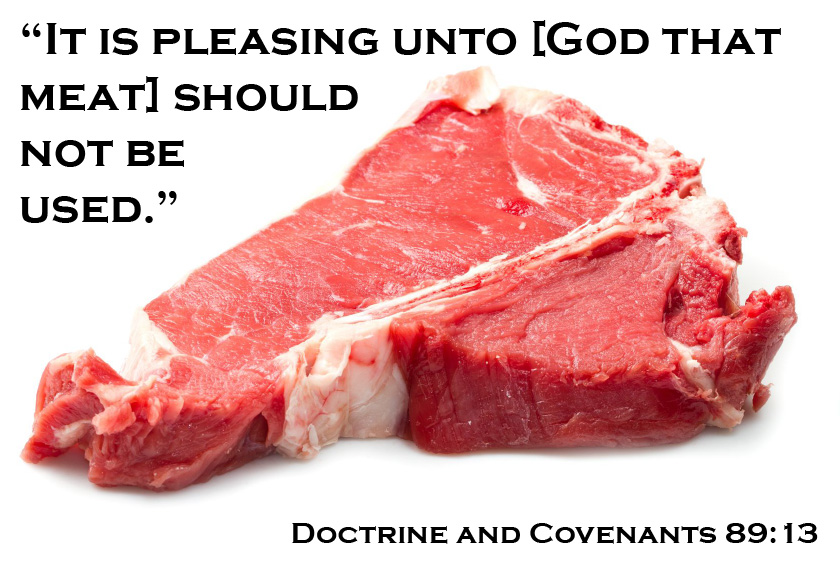