“It will be borne in mind that once on a time, there was a marriage in Cana of Galilee; and on a careful reading of that transaction, it will be discovered that no less a person than Jesus Christ was married on that occasion. If he was never married, his intimacy with Mary and Martha, and the other Mary also whom Jesus loved, must have been highly unbecoming and improper to say the best of it. I will venture to say that if Jesus Christ were now to pass through the most pious countries in Christendom with a train of women, such as used to follow him, fondling about him, combing his hair, anointing him with precious ointment, washing his feet with tears, and wiping them with the hair of their heads and unmarried, or even married. he would be mobbed, tarred, and feathered, and rode, not on an ass, but on a rail… At this doctrine the longfaced hypocrite and the sanctimonious bigot will probably cry, blasphemy! …Object not, therefore too strongly against the marriage of Christ.” 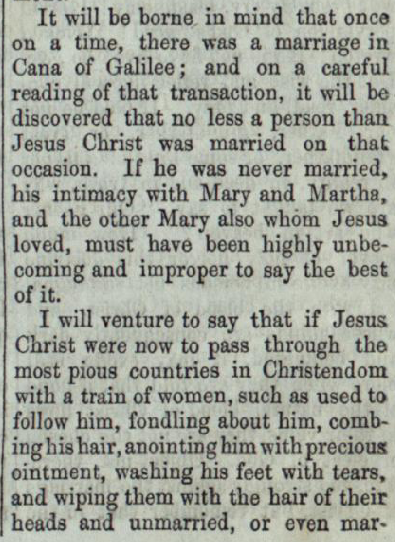