The very exclusive and secret nature of marriage in the LDS Church was not practiced in the early days of the religion. In fact, the opposite was true. The 1835 edition of the Doctrine and Covenants condemned such practices:

“[W]e believe, that all marriages in this church of Christ of Latter Day Saints, should be solemnized in a public meeting, or feast, prepared for that purpose: and that the solemnization should be performed by a presiding high priest, high priest, bishop, elder, or priest, not even prohibiting those persons who are desirous to get married, by other authority… All legal contracts of marriage made before a person is baptized into this church, should be held sacred and fulfilled.”

The later teachings of the Mormon Church were so diametrically opposed to this notion that it was eventually removed, but not until 1876; more than 40 years later.

Not only were the marriage rituals of the temple ceremony established during this time (1835-1876) so as to make marriage nothing like a “public meeting, or feast” but the notion that other marriages “should be held as sacred and fulfilled” was also disregarded, as LDS Leaders (including Joseph Smith and Brigham Young) married wives of other men, stating that the secular marriages were invalid in the sight of God.

“All legal contracts of marriage made before a person is baptized into this church, should be held sacred and fulfilled” is a peculiar idea isn’t it? If you think of the natural “opposite” of this phrase you would determine that any “marriage made after a person is baptized into the church should be held as fair game.” This passage in the Doctrine and Covenants verse was obviously inserted as a justification for marital disregard and sexual plunder. 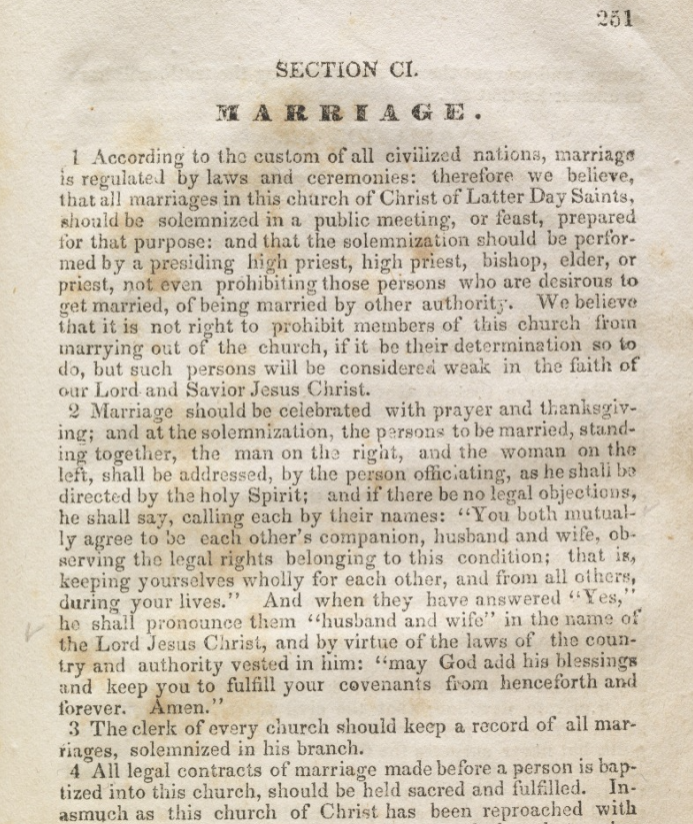