“Within four years from September 1832, there will not be one wicked person left in the United States; that the righteous will be gathered to Zion, [Missouri,] and that there will be no President over these United States after that time… I do hereby assert and declare that in four years from the date hereof, every sectarian and religious denomination in the United States, shall be broken down, and every Christian shall be gathered unto the Mormonites, and the rest of the human race shall perish. If these things do not take place, I will hereby consent to have my hand separated from my body.”

[NOTE: The typesetter for the Book of Mormon heard Harris prophesy that “Jackson would be the last president that we would have; and that all persons who did not embrace Mormonism in two years would be stricken off the face of the earth” (John H. Gilbert, “Memorandum,” 4; Vogel, Documents 2:547). In 1832 Harris saw that Jackson would be re-elected and extended his prediction four years (Vogel, “Mormonism’s ‘Anti-Masonik Bible,’” 26). In 1834 Smith said “the appointed time for the redemption of Zion” would be September 11, 1836 (Jessee, Personal Writings, 349; cf. History of the Church, 2:145)] 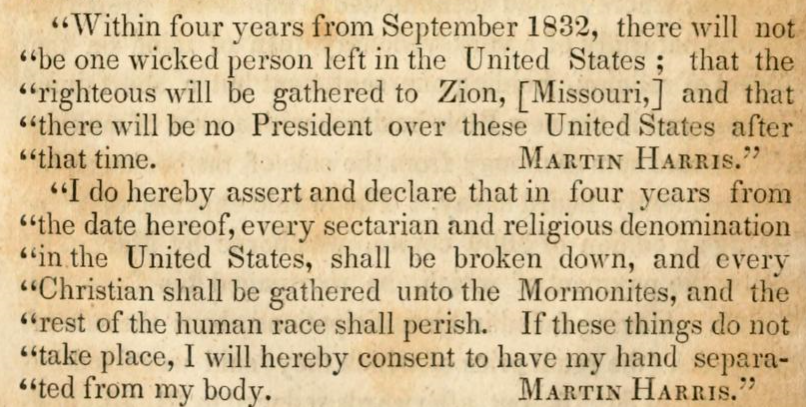