“I left the state of New York, late in the year 1810, and arrived at this place, about the 1st of Jan[uary]. following. Soon after my arrival, I formed a co-partnership with Solomon Spalding, for the purpose of re-building a forge which he had commenced a year or two before. He very frequently read to me from a manuscript which he was writing, which he entitled the ‘Manuscript Found,’ and which he represented as being found in this town. I spent many hours in hearing him read said writings, and became well acquainted with its contents. He wished me to assist him in getting his production printed, alleging that a book of that kind would meet with a rapid sale. I designed doing so, but the forge not meeting our anticipations, we failed in business, when I declined having any thing to do with the publication of the book. This book represented the American Indians as the descendants of the lost tribes, gave an account of their leaving Jerusalem, their contentions and wars, which were many and great. One time, when he was reading to me the tragic account of Laban, I pointed out to him what I considered an inconsistency, which he promised to correct; but by referring to the Book of Mormon, I find to my surprise that it stands there just as he read it to me then.- Some months ago I borrowed the Golden Bible, put it into my pocket, carried it home, and thought no more of it.- About a week after, my wife found the book in my coat pocket, as it hung up, and commenced reading it aloud as I lay upon the bed. She had not read 20 minutes till I was astonished to find the same passages in it that Spalding had read to me more, than twenty years before, from his ‘Manuscript Found.’ Since that, I have more fully examined the said Golden Bible, and have no hesitation in saying that the historical part of it is principally, if not wholly taken from the ‘Manuscript Found.’ I well recollect telling Mr. Spalding, that the so frequent use of the words ‘And it came to pass,’ ‘Now it came to pass,’ rendered it ridiculous. Spalding left here in 1812, and I furnished him the means to carry him to Pittsburgh, where he said he would get the book printed, and pay me. But I never heard any more from him or his writings, till I saw them in the Book of Mormon.” 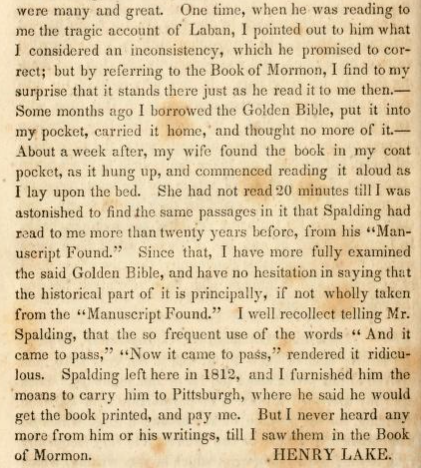