Sarah had a child by her first marriage. Both her child and first husband passed away leaving her alone.

On 10 June 1826, at age thirty seven, she married John Cleveland; who is the man she would live with and remain wed to for the rest of her life.

John and Sarah moved to Quincy, Illinois and became familiar with Mormonism. Sarah joined the Church but John never became interested in the religion and in his later years became increasingly bitter toward it.

Joseph Smith introduced Sarah to the doctrine of plural marriage and before the end of June 1842 he married her in a polyandrous union. It is doubtful that this marriage included sexual relations.

Sarah became a councilor to Emma Smith in the Relief Society. Emma was busy refuting the notion that Joseph Smith was practicing polygamy and certainly put Sarah in an awkward position since she was one of Joseph’s secret wives. It is also unlikely that Sarah informed John of her union with Joseph.

In the December following Joseph Smith’s death in 1844, Sarah was sealed to her daughter’s Father-in-Law, John Smith For Time and sealed to Joseph Smith For Eternity. Although she was married to two living men she lived only with John Cleveland.

According to the 1842 Nauvoo City tax records, the Cleveland’s owned two homes, not more than a few blocks away from each other. The main residence was in John’s name and the other home in Sarah’s. Some have written that Sarah’s house was a rendezvous residence where Joseph would secretly meet with Eliza Snow (and possibly others) as a safe place for sex.

Although she was always encouraged to move to Utah from the faithful, John Cleveland would have nothing to do with it.

“Soon after moving to the Mormon city [Nauvoo], if not before, Sarah was converted to Joseph Smith’s doctrine of celestial marriage, for she is listed by church historian Andrew Jensen as one of Smith’s wives. Although Jensen gives no date for the ceremony, Sarah and Joseph were almost certainly married before 29 June 1842, when she witnessed Eliza Snow’s marriage to Smith, according to an affidavit by Snow. Previously married wives frequently witnessed the Mormon leader’s new plural marriages, as they were part of the inner circle that could be trusted with such secret knowledge.” 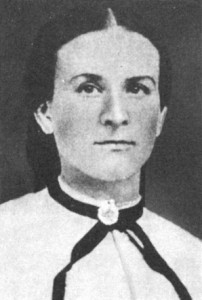