In 1829, Solomon Chamberlain (Born in 1788) published a pamphlet entitled “A Sketch of Experiences of Solomon Chamberlin.” At the time, Solomon lived near Joseph Smith; only about 20 miles from the palmyra/Manchester area. His conversion story undoubtedly influenced the scenario of Joseph Smith’s First Vision. As Solomon reached his mid-teen years, he began to gain a name for himself as being unseemly in the area. Then, in 1805 (the same year Joseph Smith was born) he went to a revival meeting that changed the course of his life. He became a Methodist for the next ten years. Then, in 1816, at the age of twenty-eight, he had a vision:

“[S]aid I, Lord I am destitute of the blessing — I cried Lord what shall I do? I am sinking into despair! And while standing between hope & despair I saw my supposed Saviour to be Satan ? who had transformed himself into an Angel of light; but he disapappeared in an instant, and the blessed son of God stood close by me and said, give your case to me.”

“That moment the light and love of God broke into my soul by the power of the Holy Ghost, and I felt a change to go all over me, and through soul and body, as plain as if a pail of water had been poured on to my body; I felt such humility as I never felt before, and such love to all mankind, even my worst enemies, as no tongue can tell, or heart conceive unless they have had the like travel. Glory, honor, and renown, be unto the Lamb forever and ever. Thus I went home rejoicing & my peace became as a river.”

For the next three years, Solomon became disillusioned with many of the churches he attended, when…

“One Monday morning while at work in my shop I was taken with a weakness through my whole system, the cause I could not tell.”

For three days the desire for food left him completely. His wife offered him milk as he seemed deluded. Then,

“I prayed in faith. That moment there was a departed spirit entered the room.” The spirit then “exhorted me to live more obedient to God, and not live so light and trifling— be more sober and watchful.”

You can read the entire pamphlet here 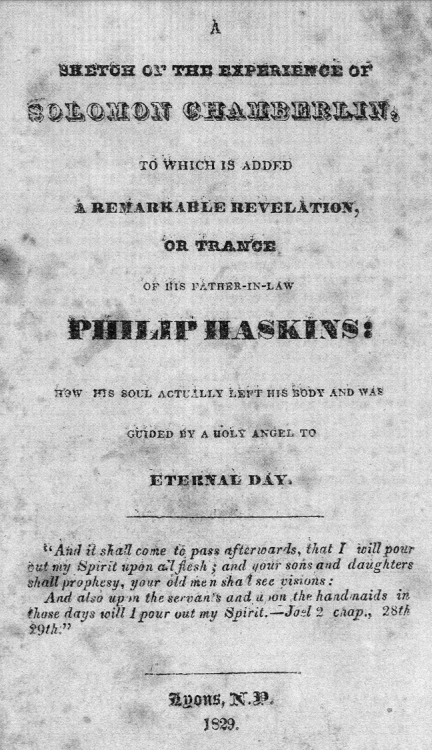