With all the recent fervor in Wordprint studies regarding various sources as primary influences of the Book of Mormon, a case is trying to be built for a “smoking gun” resource. Books such as “The Late War,” “View of the Hebrews,” and “The First Book of Napoleon” are among the list. However, almost everyone agrees, including the church itself, that the most significant influence on the Book of Mormon is the King James Bible. Somehow, perhaps to find something secular, or LESS obvious, the Bible is tacitly acknowledged and then pushed aside in pursuit of the “Golden Pot” (pun intended).

Although it’s wise to continue research from every angle, it’s just as important to compare the Book of Mormon with the most likely resource, and the Bible fits the bill as no other book can. My current project, “The Bible to Book of Mormon Comparative” highlights verse similarities in a comprehensive way. Sifting from a database of literally ‘millions’ of possibilities (which can be found at BOMsource.com in “The Book of Mormon: Likely Sources” section), this book presents ‘Best Of” comparisons to every verse in the Book of Mormon. The reader will quickly understand that the Book of Mormon is not only saturated with Biblical influence, it’s easy to see that every major doctrinal and cultural aspect of the beginnings of Mormonism sprang from the King James Bible to Joseph Smith in 1830.

In preparation for its release, I’ve been presenting memes daily showing various comparisons to the New Testament. However, this is only a small portion of what the book will contain, as the influence of both the Old Testament and the Apocrypha is equally influential. The project will likely be a 3-volume set containing around 1,500 pages in total and should be completed at some point within the next two years. 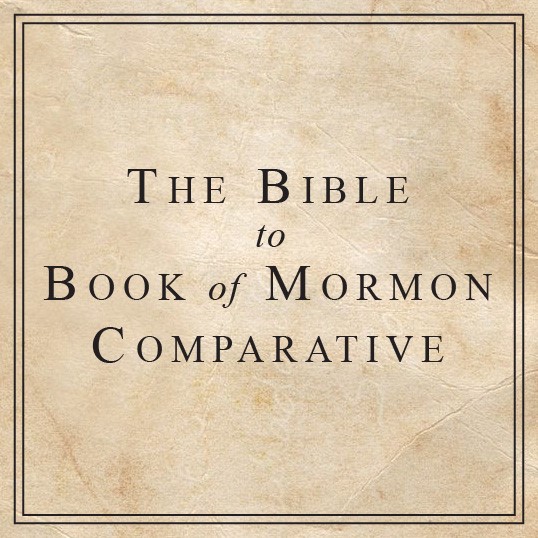