It is doubtful the term “The Good Shepherd” was used by Native Americans in B.C. 83 (see Alma 5). The insertion of this familiar term from John 10:11-16 into the Book of Mormon (BOM) can hardly be viewed as inspiration, since the writings of John would not happen (in the Old World) for at least another 170 years. Thus, it is anachronistic in nature and is one of several glaring problems with BOM chronology. To make matters worse, the average Latter-day Saint is completely unfamiliar with the fact that Joseph Smith/Oliver Cowdery introduced these three words some 65 years earlier in the Book of Mosiah 16:2. You’ll not find this reference in any printed form of the official BOM, as the origin comes from the “Original Manuscript” (OM), and copied by Oliver Cowdery into the “Printer’s Manuscript” (PM) some six months later. Although the OM is no longer extant, the words were written in the PM, struck-through by Oliver, and the caret-ed word “Lord” written in its place.

In his interpretation of the BOM entitled “The Earliest Text” (page 236), Royal Skousen chooses to use the corrected word “Lord” in this passage; oddly avoiding the original words. This is bizarre, as he admits, “[T]here would have been no reason why Oliver should have made this change in the P[M] for Mosiah 16:2 except that O[M] read that way” (Analysis of Textural Variants of the Book of Mormon 2:1345-1346). This is a rare, biased move by Skousen, as most of his evaluations are agreeable. Additionally, the use of “Lord” is clumsy, as it is penned again three words later; giving the verse a less poetic feel. 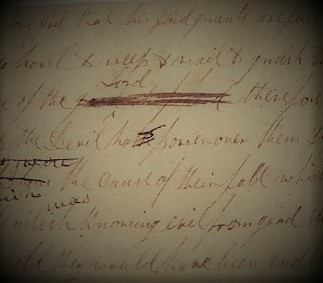