From “The Bible to Book of Mormon Comparative”…

Here is a brief explanation of what you see:

A. Italicized words (‘Alma’ in this case) are only found in the BOM, never in the KJV.

B. Words in bold type are normally exact 3+word strings or are significant in some other way.

C. Underlined BLACK words are strings which only occur ONCE in the text of the BOM or KJV.

D. Underlined RED words are strings which only occur ONCE in the text of both the BOM and KJV.

Mosiah 26:13 is the featured verse here. It also happens to be exactly where I am in my progress through this new book. I glean the information from a huge database. In Mosiah 26:13 ALONE there are 2,715 three+ word string matches to the KJV/Apocrypha. The PIC you see here is the “Best of” those matches. If you’re interested in seeing the raw data in bulk, I post it immediately upon finishing a full BOM chapter at BOMsource.com in “Likely Sources.”

“Now the spirit” is included here as it was detected by the Tanners in their book “Joseph Smith’s Plagiarism of the Bible” (page 80). The Timothy reference is the only time these three words occur in the KJV, and is therefore underlined. Joseph Smith used it three times in the BOM, therefore it is NOT underlined in Mosiah 26:13.

“troubled; and he” only occurs in the BOM and KJV once and is underlined in Bold-Red text. This seemingly lack-luster string from Genesis takes on significant plagiarism value when viewed with its accompanying Bold-Black words. “spirit of Alma was again troubled; and he went and inquired” parallels “spirit was troubled; and he sent and called for.” So close, in fact, that it’s ‘fairly safe to say’ that Genesis 41:8 was utilized to formulate this text in Mosiah.

“of the LORD, What he” from Numbers is also lack-luster. However, I will be presenting EVERY 5+ word string match in the book in underlined Bold-Red type, as the likelihood of these matches are normally significant. Note on the BOM side that the string is typed “/of the Lord/what he.” Each BOM verse will have the highest count match (usually 3-word strings) surrounded by a pair of forward-slashes. “of the Lord” has 1,942 Biblical matches.

“this matter,/;for” only occurs in this Acts passage, but is also found in Alma 60:18. As such it is not underlined on the BOM side. Finding multiple exact word string matches in a single verse is exciting, and the addition of “in the sight of God” fits the bill. This 5-word string happens 13 times in the KJV and 5 times in the BOM, and as such is quite common. However, the synonyms of “not right” and “wrong” are unique to each book, and when coupled with “this matter for” is a strong case for lifting.

Many modern-day readers are quite unfamiliar with the books of the Apocrypha, even though these books were included in nearly every U.S. version of the 1769 KJV. “He feared that he should” are the first five words from this verse in 1st Maccabees, and can be found nowhere else in the KJV or the BOM. Matches with words beginning or ending a verse are significant, as they are triggers for those who memorize passages. 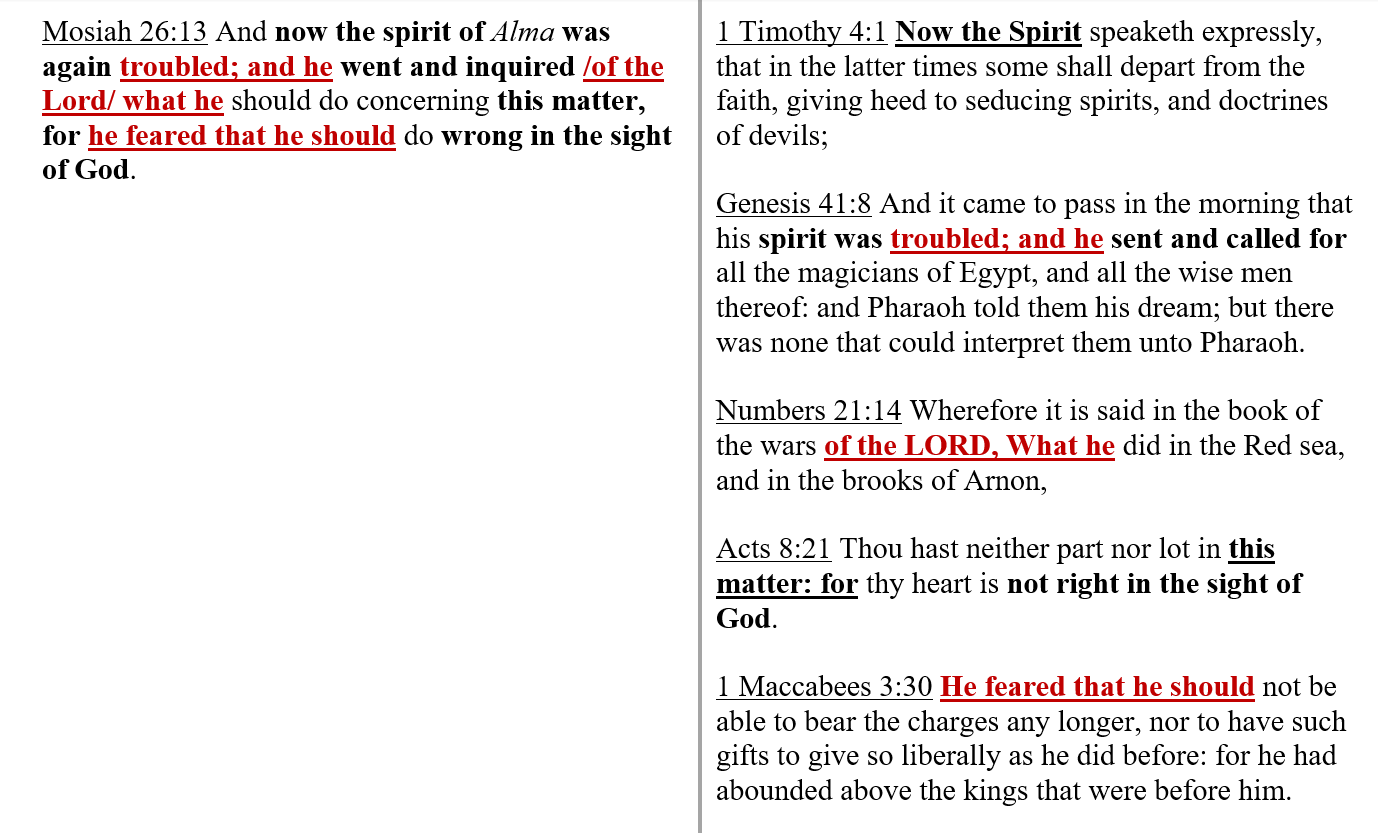