“Here let me say again, according to the Book of Mormon, many of those great islands that are found in the Indian Ocean, also in the great Pacific Sea, have been planted with colonies of Israelites [see 2 Nephi 21:11]. Do they not resemble each other? Go to the Sandwich Islands, to the South Sea Islands, to Japan – go to the various islands of the Pacific Ocean, and you find a general resemblance in the characters and countenances of the people. Who are they? According to the Book of Mormon, Israelites were scattered forth from time to time, and colonies planted on these islands of the ocean.” 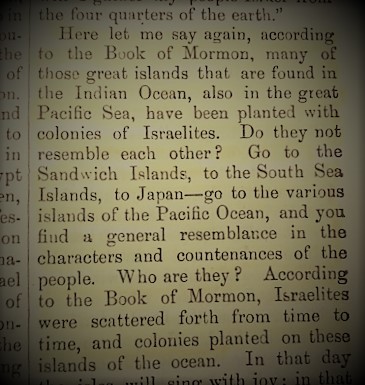