“I, Peter Ingersoll, first became acquainted with the family of Jopesh Smith, Sen. in the year of our Lord, 1822. – I lived in the neighborhood of said family, until about 1830; during which time the following facts came under my observation.

“The general employment of the family, was digging for money. I had frequent invitations to join the company, but always declined being one of their number. They used various arguments to induce me to accept of their invitations. I was once ploughing near the house of Joseph Smith, Sen. about noon, he requested me to walk with him a short distance from his house, for the purpose of seeing whether a mineral rod would work in my hand, saying at the same time he was confident it would. As my oxen were eating, and being myself at leisure, I accepted the invitation. – When we arrived near the place at which he thought there was money, he cut a small witch hazle bush and gave me direction how to hold it. He then went off some rods, and told me to say to the rod, ‘work to the money,’ which I did, in an audible voice. He rebuked me severely for speaking it loud, and said it must be spoken in a whisper. This was rare sport for me. While the old man was standing off some rods, throwing himself into various shapes, I told him the rod did not work. He seemed much surprised at this, and said he thought he saw it move in my hand. It was now time for me to return to my labor. On my return, I picked up a small stone and was carelessly tossing it from one hand to the other. Said he, (looking very earnestly) what are you going to do with that stone? Throw it at the birds, I replied. No, said the old man, it is of great worth; and upon this I gave it to him. Now, says he, if you only knew the value there is back of my house, (and pointing to a place near) – there, exclaimed he, is one chest of gold and another of silver. He then put the stone which I had given him, into his hat, and stooping forward, he bowed and made sundry maneuvers, quite similar to those of a stool pigeon. At length he took down his hat, and being very much exhausted, said, in a faint voice, ‘if you knew what I had seen, you would believe.’ To see the old man thus try to impose upon me, I confess, rather had a tendency to excite contempt than pity. Yet I thought it best to conceal my feelings, preferring to appear the dupe of my credulity, than to expose myself to his resentment. His son Alvin then went through with the same performance, which was equally disgusting.

“At another time, he told me that the ancient inhabitants of this country used camels instead of horses. For proof of this fact, he stated that in a certain hill on the farm of Mr. Cuyler, there was a cave containing an immense value of gold and silver, stands of arms, also, a saddle for a camel, hanging on a peg at one side of the cave. I asked him, of what kind of wood the peg was. He could not tell, but said it had become similar to stone or iron.

“The old man at last laid a plan which he thought would accomplish his design. His cows and mine had been gone for some time, and were not to be found, notwithstanding our diligent search for them. Day after day was spent in fruitless search, until at length he proposed to find them by his art of divination. So he took his stand near the corner of his house, with a small stick in his hand, and made several strange and peculiar motions, and then said he could go directly to the cows. So he started off, and went into the woods about one hundred rods distant and found the lost cows. But on finding out the secret of the mystery, Harrison had found the cows, and drove them to the above named place, and milked them. So that this stratagem turned out rather more to his profit that it did to my edification.- The old man finding that all his efforts to make me a money digger, had proved abortive, at length ceased his importunities. One circumstance, however, I will mention before leaving him. Some time before young Joseph found, or pretended to find, the gold plates, the old man told me that in Canada, there had been a book found, in a hollow tree, that gave an account of the first settlement of this country before it was discovered by Columbus.

“In the month of August, 1827, I was hired by Joseph Smith, Jr. to go to Pennsylvania, to move his wife’s household furniture up to Manchester, where his wife then was. When we arrived at Mr. [Isaac] Hale’s, in Harmony, PA. from which place he had taken his wife, a scene presented itself, truly affecting. His father-in-law (Mr. Hale) addressed Joseph, in a flood of tears: ‘You have stolen my daughter and married her.  I had much rather have followed her to her grave.  You spend your time in digging for money -pretend to see in a stone, and thus try to deceive people.’ Joseph wept, and acknowledged he could not see in a stone now, nor never could; and that his former pretensions in that respect, were all false. He then promised to give up his old habits of digging for money and looking into stones. Mr. Hale told Joseph, if he would move to Pennsylvania and work for a living, he would assist him in getting into business. Joseph acceded to this proposition. I then returned with Joseph and his wife to Manchester. One circumstance occurred on the road, worthy of notice, and I believe this is the only instance where Jo ever exhibited true yankee wit. On our journey to Pennsylvania, we could not make the exact change at the toll gate near Ithaca. Joseph told the gate tender, that he would ‘hand’ him the toll on his return, as he was coming back in a few days. On our return, Joseph tendered to him 25 cents, the toll being 12 1/2. He did not recognize Smith, so he accordingly gave him back the 12 1/2 cents. After we had passed the gate, I asked him if he did not agree to pay double gatage on our return? No, said he, I agreed to ‘hand’ it to him, and I did, but he handed it back again.

“Joseph told me on his return, that he intended to keep the promise which he had made to his father-in-law; but, said he, it will be hard for me, for they will all oppose, as they want me to look in the stone for them to dig money: and in fact it was as he predicted. They urged him, day after day, to resume his old practice of looking in the stone. – He seemed much perplexed as to the course he should pursue. In this dilemma, he made me his confident and told me what daily transpired in the family of Smiths. One day he came, and greeted me with a joyful countenance. – Upon asking the cause of his unusual happiness, he replied in the following language: ‘As I was passing, yesterday, across the woods, after a heavy shower of rain, I found, in a hollow, some beautiful white sand, that had been washed up by the water.  I took off my frock, and tied up several quarts of it, and then went home.  On my entering the house, I found the family at the table eating dinner. They were all anxious to know the contents of my frock. At that moment, I happened to think of what I had heard about a history found in Canada, called the golden Bible; so I very gravely told them it was the golden Bible. To my surprise, they were credulous enough to believe what I said. Accordingly I told them that I had received a commandment to let no one see it, for, says I, no man can see it with the naked eye and live. However, I offered to take out the book and show it to them, but they refuse to see it, and left the room.’ Now, said Jo, ‘I have got the damned fools fixed, and will carry out the fun.’ Notwithstanding, he told me he had no such book, and believed there never was any such book, yet, he told me that he actually went to Willard Chase, to get him to make a chest, in which he might deposit his golden Bible. But, as Chase would not do it, he made a box himself, of clap-boards, and put it into a pillow case, and allowed people only to lift it, and feel of it through the case.

“In the fall of 1827, Joseph wanted to go to Pennsylvania. His brother-in-law had come to assist him in moving, but he himself was out of money. He wished to borrow the money of me, and he presented Mr. Hale as security. I told him in case he could obtain assistance from no other source, I would let him have some money. Joseph then went to Palmyra; and, said he, I there met that dam fool, Martin Harris, and told him that I had a command to ask the first honest man I met with, for fifty dollars in money, and he would let me have it. I saw at once, said Jo, that it took his notion, for he promptly gave me the fifty.

“Joseph thought this sum was sufficient to bear his expenses to Pennsylvania. So he immediately started off, and since that time I have not been much in his society. While the Smiths were living at Waterloo, William visited my neighborhood, and upon my inquiry how they came on, he replied, ‘we do better there than here; we were too well known here to do much.”

I certify, that on this 9th day of December, 1833, personally appeared before me the above named Peter Ingersoll, to me known, and made oath, according to law, to the truth of the above statement. 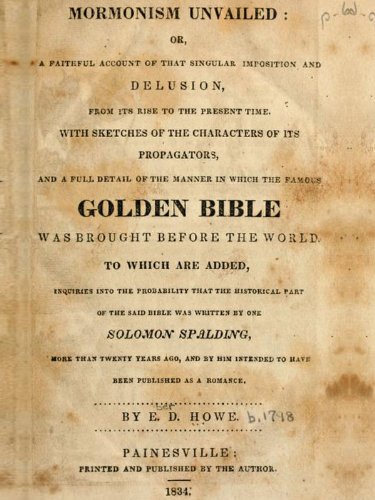