“In the month of October, 1811, I went from the township of Madison to Conneaut, for the purpose of securing a debt due me from Solomon Spalding. I tarried with him nearly two days, for the purpose of accomplishing my object, which I was finally unable to do. I found him destitute of the means of paying his debts. His only hope of ever paying his debts, appeared to be upon the sale of a book, which he had been writing. He endeavored to convince me from the nature and character of the work that it would meet with a ready sale. Before showing me his manuscripts, he went into a verbal relation of its outlines, saying that it was a fabulous or romantic history of the first settlement of this country, and as it purported to have been a record found buried in the earth, or in a cave, he had adopted the ancient or scripture style of writing. He then presented his manuscripts, when we sat down and spent a good share of the night, in reading them, and conversing upon them. I well remember the name of Nephi, which appeared to be the principal hero of the story. The frequent repetition of the phrase, ‘I Nephi’ [85 times in the first 116 pages; 2013 edition], I recollect as distinctly as though it was but yesterday, although the general features of the story have passed from my memory, through the lapse of 22 years. He attempted to account for the numerous antiquities which are found upon this continent, and remarked that, after this generation had passed away, his account of the first inhabitants of America would be considered as authentic as any other history. The Mormon Bible I have partially examined, and am fully of the opinion that Solomon Spalding had written its outlines before he left Conneaut.” 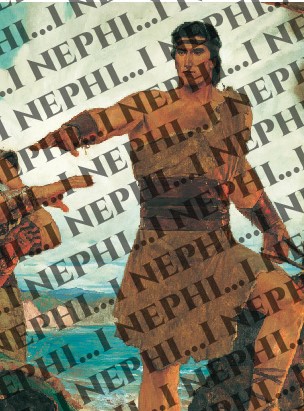