Zina Diantha Huntington was born 31 January 1821, about 15 years after Joseph Smith. She was perhaps the most well-known, visible wife of Joseph, and rose to many accolades prior to her death.

This was a polyandrous marriage. Joseph Smith and Henry Bailey Jacobs were courting her at the same time, however, she chose Henry over Joseph.

As was the case with most of the women he was turned down by, Joseph saw this as more of a setback than a denial.

Joseph Smith was supposed to perform the wedding ceremony, but never showed up. When questioned about it he informed Zina that he was commanded by God, under the threat of certain death to himself in the message, to marry her. Zina consented and was sealed to Joseph Smith for Eternity out of religious duty and was married to Henry for Time only. Zina and Henry continued to live together.

Three years later (after the death of Joseph Smith), Brigham Young approached her and told her that with the death of the Prophet that she needed to marry him. This was a very odd request given the fact that Joseph was her eternal mate and Henry Bailey was her mate for this life. Regardless of this fact, and because Brigham felt a sense of responsibility to care for Joseph’s widows, Brigham also married her for Time only …setting a new and bizarre precedent.

Brigham Young called Henry Jacobs to serve a mission to England in 1846. During Jacobs’ absence, and in the beginning of their exodus from the east, Zina began living openly in a marital relationship with Brigham Young, and continued to do so for the rest of her life, without ever obtaining a divorce from Henry Jacobs.

Henry Jacobs never gave up loving Zina and their children. He often wrote to her expressing his longings. After hearing of Henry’s letters, Brigham Young excommunicated him from the Church.

Zina lived a long and lonely life, especially toward the end. She lived to see the beginning and the ending of the construction of the Salt Lake Temple and was actively involved in the women’s organizations of the Church until her death in 1901.

“Zina, faced with the responsibility for his position as prophet, and even perhaps his life, finally acquiesced. The usual date for the marriage is 27 October, and throughout her life Zina commemorated her marriage to [Joseph] Smith on this date.” 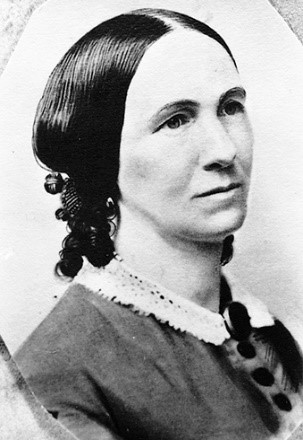