“The name of the town in the Comoros and the name of the islands themselves appear to be independent of the Book of Mormon. ‘Moroni’ has a meaning in the local language, viz. ‘at the place of fire.’ It is constructed of the root ‘moro,’ which means ‘fire’ or ‘heat’ and the locative ‘-ni,’ which means ‘at the place of’ or ‘in.’ This is a logical name constructed from the morphemes of the language reflecting the fact that the community is located at the base of an immense, active volcano. Likewise, the name ‘Comoro’ has a meaning. It is composed of an old Swahili locative ‘ko-‘and the word ‘moro.’ Its meaning is also ‘the place of fire.’

“Whether the relationship between the terms in the Book of Mormon and the names in the islands is coincidental or there is some historical relationship between the two is not certain at present. The archaeological evidence suggests that the groups mentioned in the Book of Mormon did not have any contact with the Comoro Islands. On the other hand, it is not unlikely that Joseph Smith had heard of Moroni and the Comoro Islands since they were known to Americans as early as the seventeenth century and many whalers from New England had visited the islands in the early part of the nineteenth century. Their names were probably heard throughout the northeastern United States at the time Smith had his vision. They then could have become part of Smith’s rendition of the Book of Mormon.” 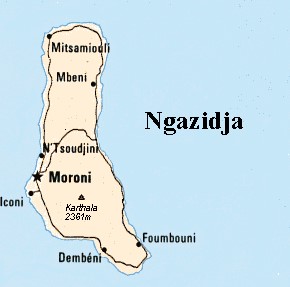