Among the damning evidence against the church, and certainly the most obvious, is the “Tree of Life” vision in First Nephi which is copied from a vision his father (JS, sr.) had many years before JS authored the Book of Mormon. Over thirty correlations exist between Joseph Smith Sr.’s dream and Joseph Smith Jr.’s (Lehi’s dream or vision of the tree of life) found in 1 Nephi 8. I’ll not editorialize on it further, but present both below for your evaluation:

“Behold, I have dreamed a dream; or, in other words, I have seen a vision.

“But behold, Laman and Lemuel, I fear exceedingly because of you; for behold, methought I saw in my dream, a dark and dreary wilderness.

“And it came to pass that I saw a man, and he was dressed in a white robe; and he came and stood before me.

“And it came to pass that he spake unto me, and bade me follow him.

“And it came to pass that as I followed him I beheld myself that I was in a dark and dreary waste.

“And after I had traveled for the space of many hours in darkness, I began to pray unto the Lord that he would have mercy on me, according to the multitude of his tender mercies.

“And it came to pass after I had prayed unto the Lord I beheld a large and spacious field.

“And it came to pass that I beheld a tree, whose fruit was desirable to make one happy.

“And as I partook of the fruit thereof it filled my soul with exceedingly great joy; wherefore, I began to be desirous that my family should partake of it also; for I knew that it was desirable above all other fruit.

“And as I cast my eyes round about, that perhaps I might discover my family also, I beheld a river of water; and it ran along, and it was near the tree of which I was partaking the fruit.

“And I looked to behold from whence it came; and I saw the head thereof a little way off; and at the head thereof I beheld your mother Sariah, and Sam, and Nephi; and they stood as if they knew not whither they should go.

“And it came to pass that I beckoned unto them; and I also did say unto them with a loud voice that they should come unto me, and partake of the fruit, which was desirable above all other fruit.

“And it came to pass that they did come unto me and partake of the fruit also.

“And it came to pass that I was desirous that Laman and Lemuel should come and partake of the fruit also; wherefore, I cast mine eyes towards the head of the river, that perhaps I might see them.

“And it came to pass that I saw them, but they would not come unto me and partake of the fruit.

“And I beheld a rod of iron, and it extended along the bank of the river, and led to the tree by which I stood.

“And I also beheld a strait and narrow path, which came along by the rod of iron, even to the tree by which I stood; and it also led by the head of the fountain, unto a large and spacious field, as if it had been a world.

“And I saw numberless concourses of people, many of whom were pressing forward, that they might obtain the path which led unto the tree by which I stood.

“And it came to pass that they did come forth, and commence in the path which led to the tree.

“And it came to pass that I beheld others pressing forward, and they came forth and caught hold of the end of the rod of iron; and they did press forward through the mist of darkness, clinging to the rod of iron, even until they did come forth and partake of the fruit of the tree.

“And after they had partaken of the fruit of the tree they did cast their eyes about as if they were ashamed.

“And I also cast my eyes round about, and beheld, on the other side of the river of water, a great and spacious building; and it stood as it were in the air, high above the earth.

“And it was filled with people, both old and young, both male and female; and their manner of dress was exceedingly fine; and they were in the attitude of mocking and pointing their fingers towards those who had come at and were partaking of the fruit.

“And after they had tasted of the fruit they were ashamed, because of those that were scoffing at them; and they fell away into forbidden paths and were lost.

“And now I, Nephi, do not speak all the words of my father.

“But, to be short in writing, behold, he saw other multitudes pressing forward; and they came and caught hold of the end of the rod of iron; and they did press their way forward, continually holding fast to the rod of iron, until they came forth and fell down and partook of the fruit of the tree.

“And he also saw other multitudes feeling their way towards that great and spacious building.

“And it came to pass that many were drowned in the depths of the fountain; and many were lost from his view, wandering in strange roads.

“I thought,” said he, “I was traveling in an open, desolate field, which appeared to be very barren. As I was thus traveling, the thought suddenly came into my mind that I had better stop and reflect upon what I was doing, before I went any farther. So I asked myself, ‘What motive can I have in traveling here, and what place can this be?’ My guide, who was by my side, as before, said, ‘This is the desolate world; but travel on.’ The road was so broad and barren that I wondered why I should travel in it; for, said I to myself, ‘Broad is the road, and wide is the gate that leads to death, and many there be that walk therein; but narrow is the way, and strait is the gate that leads to everlasting life, and few there be that go in thereat.’ Traveling a short distance further, I came to a narrow path. This path I entered, and, when I had traveled a little way in it, I beheld a beautiful stream of water, which ran from the east to the west. Of this stream, I could see neither the source nor yet the mouth; but as far as my eyes could extend I could see a rope, running along the bank of it, about as high as a man could reach, and beyond me was a low, but very pleasant valley, in which stood a tree such as I had never seen before. It was exceedingly handsome, insomuch that I looked upon it with wonder and admiration. Its beautiful branches spread themselves somewhat like an umbrella, and it bore a kind of fruit, in shape much like a chestnut bur, and as white as snow, or, if possible, whiter. I gazed upon the same with considerable interest, and as I was doing so, the burs or shells commenced opening and shedding their particles, or the fruit which they contained, which was of dazzling whiteness. I drew near and began to eat of it, and I found it delicious beyond description. As I was eating, I said in my heart, ‘I cannot eat this alone, I must bring my wife and children, that they may partake with me.’ Accordingly, I went and brought my family, which consisted of a wife and seven children, and we all commenced eating and praising God for this blessing.. We were exceedingly happy, insomuch that our Joy could not easily be expressed. While thus engaged, I beheld a spacious building standing opposite the valley which we were in, and it appeared to reach to the very heavens. It was full of doors and windows, and they were all filled with people, who were very finely dressed. When these people observed us in the low valley, under the tree, they pointed the finger of scorn at us, and treated us with all manner of disrespect and contempt. But their contumely we utterly disregarded. I presently turned to my guide and inquired of him the meaning of the fruit that was so delicious. He told me it was the pure love of God, shed abroad in the hearts of all those who love him, and keep his commandments. He then commanded me to go and bring the rest of my children. I told him that we were all there. ‘No,’ he replied, ‘look yonder, you have two more, and you must bring them also.’ Upon raising my eyes, I saw two small children, standing some distance off. I immediately went to them, and brought them to the tree; upon which they commenced eating with the rest, and we all rejoiced together. The more we ate, the more we seemed to desire, until we even got down upon our knees and scooped it up, eating it by double handfuls. After feasting in this manner a short time, I asked my guide what was the meaning of the spacious building which I saw. He replied, ‘It is Babylon, it is Babylon, and it must fall. The people in the doors and windows are the inhabitants thereof, who scorn and despise the Saints of God because of their humility.’” 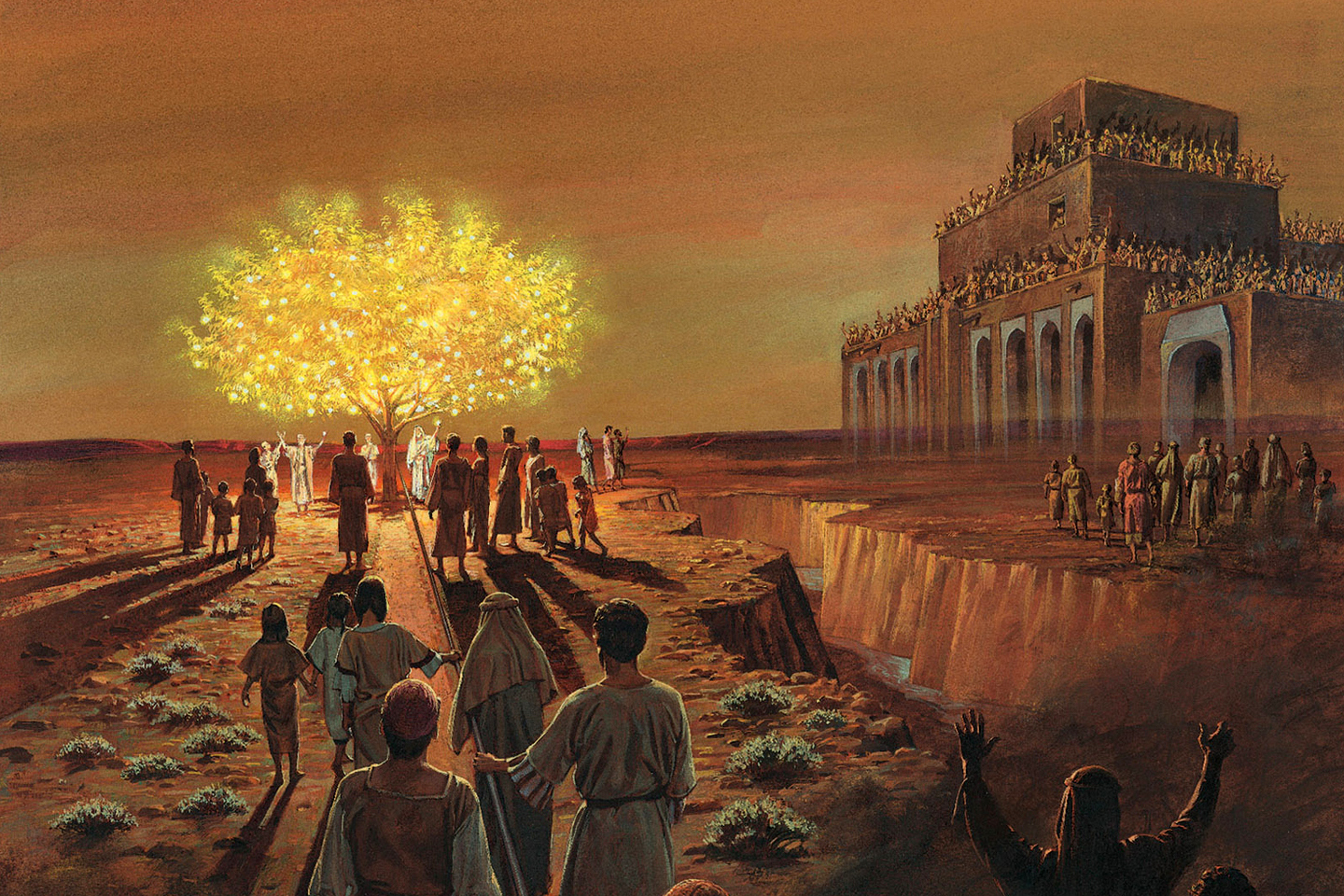