The incorrect historicity of the Book of Abraham holds more than enough evidence to dismiss it as fiction, let alone sacred verse. But, the text itself is flawed in more ways than the famous basis Mormonism gave for racism (see Abraham 1:21-28 and 3:22-26).

See the pattern? This is very common in many languages… as in Johnson, Smithson, Jensen, Anderson.

In the Book of Abraham, Joseph uses this faux-Egyptian suffix for ‘son’ in a different context. Abraham 3:13 identifies the Lord’s names for the Sun, the Moon, and the Stars. The name of the Sun is identified as ‘Shinehah.’

That’s right, you read this correctly. Joseph Smith claimed that God told him the name of the Sun was ‘Shine Son,’ or, in other words ‘Sunshine.’

Special thanks to “S.B.” in MSPC for this one. 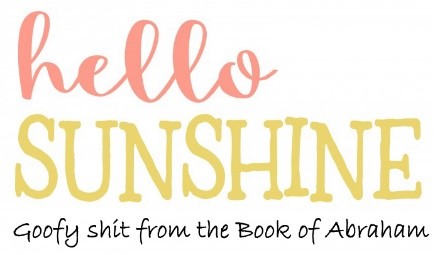