In 1855 Brigham Young taught, “The Lord did not come” to Joseph Smith in the First Vision. Instead, he sent an angel to deliver these words attributed to Jesus Christ in the current canon:

“I was answered that I must join none of them, for they were all wrong;”

“The messenger did not come to an eminent divine of any of the so-called orthodoxy, he did not adopt their interpretations of the Holy Scriptures. The Lord did not come with the armies of heaven, in power and great glory, nor send His messengers panoplied with aught else than the truth of heaven, to communicate to the meek, the lowly, and the youth of humble origin, the sincere enquirer after the knowledge of God. But He did send His angel to this same obscure person, Joseph Smith jun., who afterwards became a Prophet, Seer, and Revelator, and informed him that he should not join any of the religious sects of the day, for they were all wrong.” 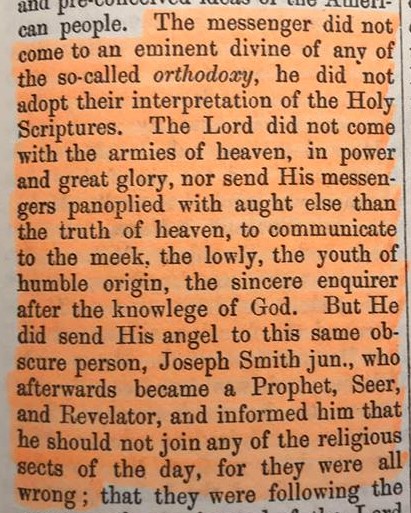