Joseph Smith’s enemies were to be confounded when they sought to destroy him. But, he was shot and killed in Carthage, Illinois, while in jail on 27 June 1844. The mob was not confounded, and Smith defended himself with a gun – which disqualifies him as a martyr:

“And thus prophesied Joseph, saying: Behold, that seer [Joseph Smith’s self-projection] will the Lord bless; and they that seek to destroy him shall be confounded; for this promise, which I have obtained of the Lord, of the fruit of my loins, shall be fulfilled. Behold, I am sure of the fulfilling of this promise; and his name shall be called after me; and it shall be after the name of his father. And he shall be like unto me; for the thing, which the Lord shall bring forth by his hand, by the power of the Lord shall bring my people unto salvation. Yea, thus prophesied Joseph: I am sure of this thing, even as I am sure of the promise of Moses; for the Lord hath said unto me, I will preserve thy seed forever.” 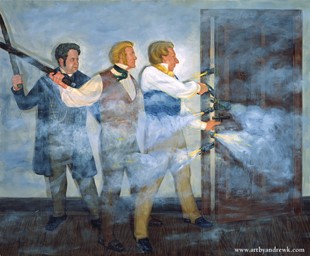