“Joseph [Smith, Jr.] spent as much time as he could with Emma [Hale] that winter, sometimes borrowing the Knights’ sleigh when snow made it hard to travel to the Hales’ house. But her parents still did not like him, and his efforts to win over the family failed.”

In-law troubles. Most of us have them. But few of us have reasons to dislike our son-in-law the way Emma’s father, Isaac Hale, had.

Here is his description of the scene, eight+ years after he initially crossed paths with Joseph Smith, Jr. and eight years ‘to-the-day’ from Joseph Smith’s New York Court conviction…

“Smith, and his father, with several other ‘money-diggers’ boarded at my house while they were employed in digging for a mine that they supposed had been opened and worked by the Spaniards, many years since. Young Smith gave the ‘money-diggers’ great encouragement, at first, but when they had arrived in digging, to near the place where he had stated an immense treasure would be found – he said the enchantment was so powerful that he could not see. They then became discouraged, and soon after dispersed. This took place about the 17th of November, 1825; and one of the company gave me his note for $12[.]68 for his board, which is still unpaid.

“After these occurrences, young Smith made several visits at my house, and at length asked my consent to his marrying my daughter Emma. This I refused, and gave him my reasons for so doing; some of which were, that he was a stranger, and followed a business that I could not approve: he then left the place. Not long after this, he returned, and while I was absent from home, carried off my daughter, into the state of New York, where they were married without my approbation or consent.

“After they had arrived at Palmyra [Manchester] N.Y., Emma wrote to me inquiring whether she could have her property, consisting of clothing, furniture, cows, &c. I replied that her property was safe, and at her disposal. In a short time they returned, bringing with them a Peter Ingersol, and subsequently came to the conclusion that they would move out, and reside upon a place near my residence.

“Smith stated to me, that he had given up what he called ‘glass-looking,’ and that he expected to work hard for a living, and was willing to do so. He also made arrangements with my son Alva Hale, to go to Palmyra, and move his (Smith’s) furniture &c. to this place. He then returned to Palmyra, and soon after, Alva, agreeable to the arrangement, went up and returned with Smith and his family.

“I inquired of Joseph Smith Jr., who was to be the first who would be allowed to see the Book of Plates? He said it was a young child [their first-born, who unfortunately died shortly after birth]. After this, I became dissatisfied, and informed him that if there was any thing in my house of that description, which I could not be allowed to see, he must take it away; if he did not, I was determined to see it. After that, the Plates were said to be hid in the woods.

“Soon after this happened, Martin Harris informed me that he must have a greater witness, and said that he had talked with Joseph about it – Joseph informed him that he could not, or durst not show him the plates, but that he (Joseph) would go into the woods where the Book of Plates was, and that after he came back, Harris should follow his track in the snow, and find the Book, and examine it for himself. Harris informed me afterwards, that he followed Smith’s directions, and could not find the Plates, and was still dissatisfied.

“Joseph Smith Jr. resided near me for some time after this, and I had a good opportunity of becoming acquainted with him, and somewhat acquainted with his associates, and I conscientiously believe from the facts I have detailed, and from many other circumstances, which I do not deem it necessary to relate, that the whole ‘Book of Mormon’ (so called) is a silly fabrication of falsehood and wickedness, got up for speculation, and with a design to dupe the credulous and unwary – and in order that its fabricators might live upon the spoils of those who swallowed the deception.”  ISAAC HALE.

State of Pennsylvania, Susquehanna County, ss. We, the subscribers, associate Judges of the Court of Common Pleas, in and for said county, do certify that we have been for many years personally acquainted with Isaac Hale, of Harmony township in this county, who has attested the foregoing statement; and that he is a man of excellent moral character, and of undoubted veracity. Witness our hands. WILLIAM THOMPSON. DAVIS DIMOCK.  March 21st, 1834.

RE-rewrite: “Joseph [Smith, Jr.] spent as much time as he could with Emma [Hale] that winter, sometimes borrowing the Knights’ sleigh when snow made it hard to travel to the Hales’ house. But her parents still did not like him, and because of his deception and preoccupation with treasure hunting, using the stone in a hat, his efforts to win over the family failed.” 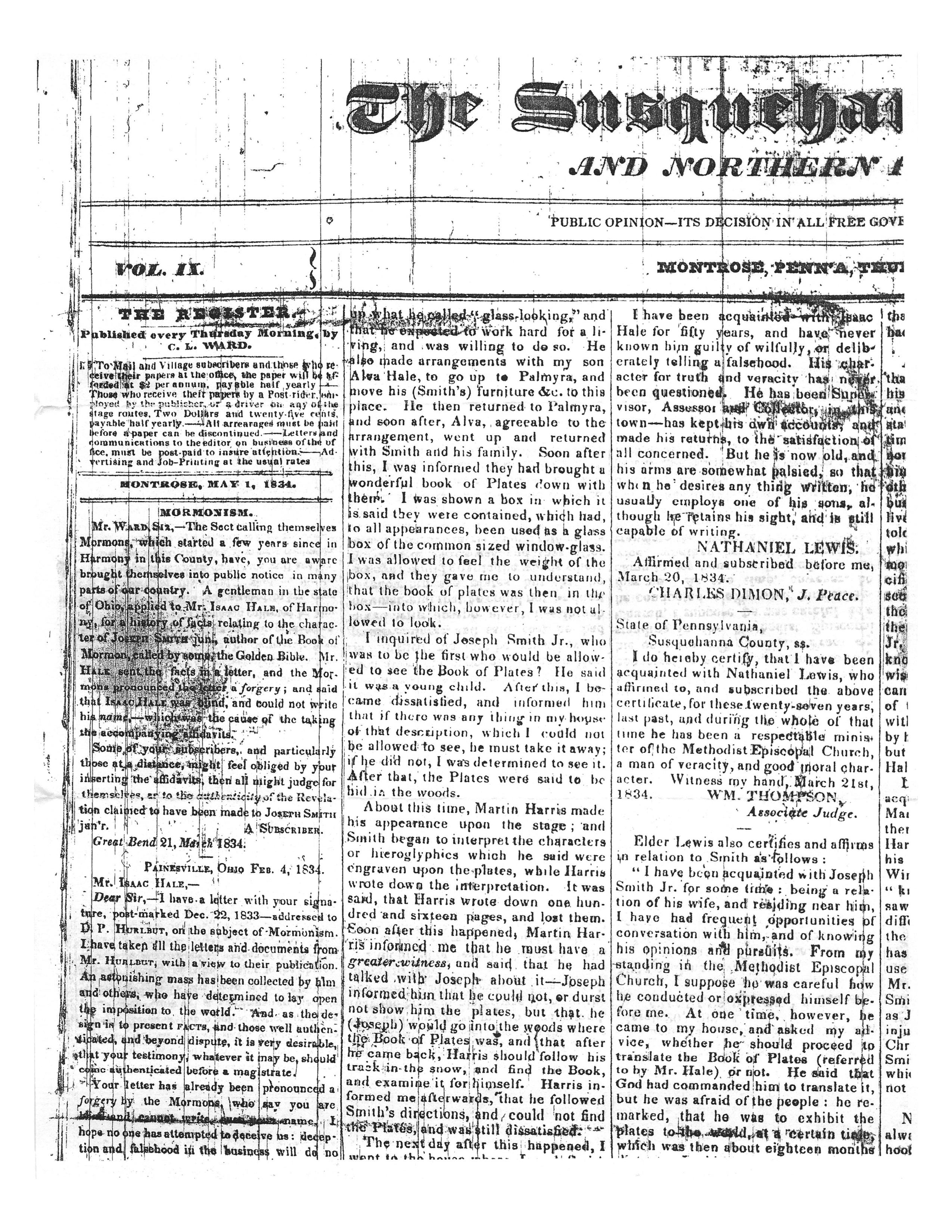 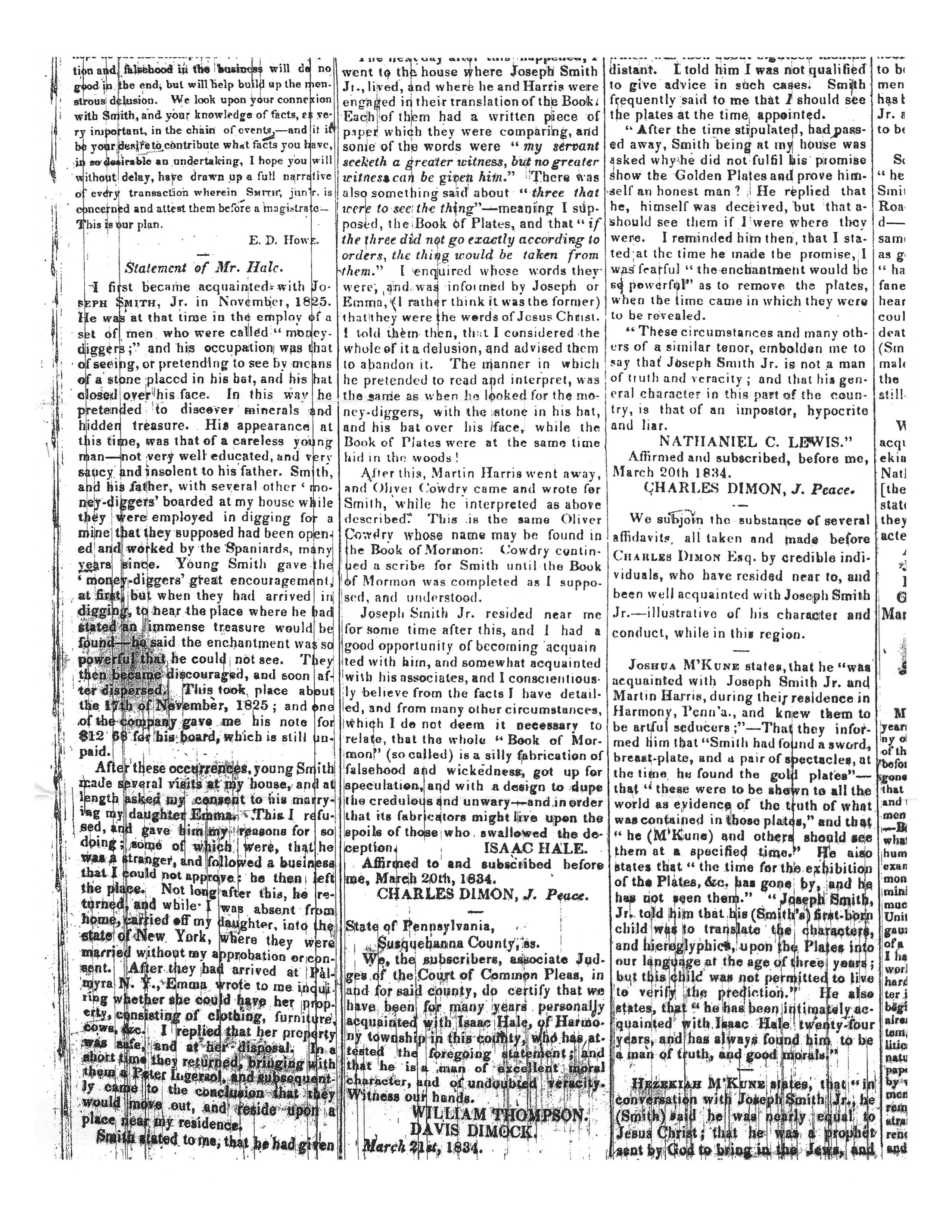 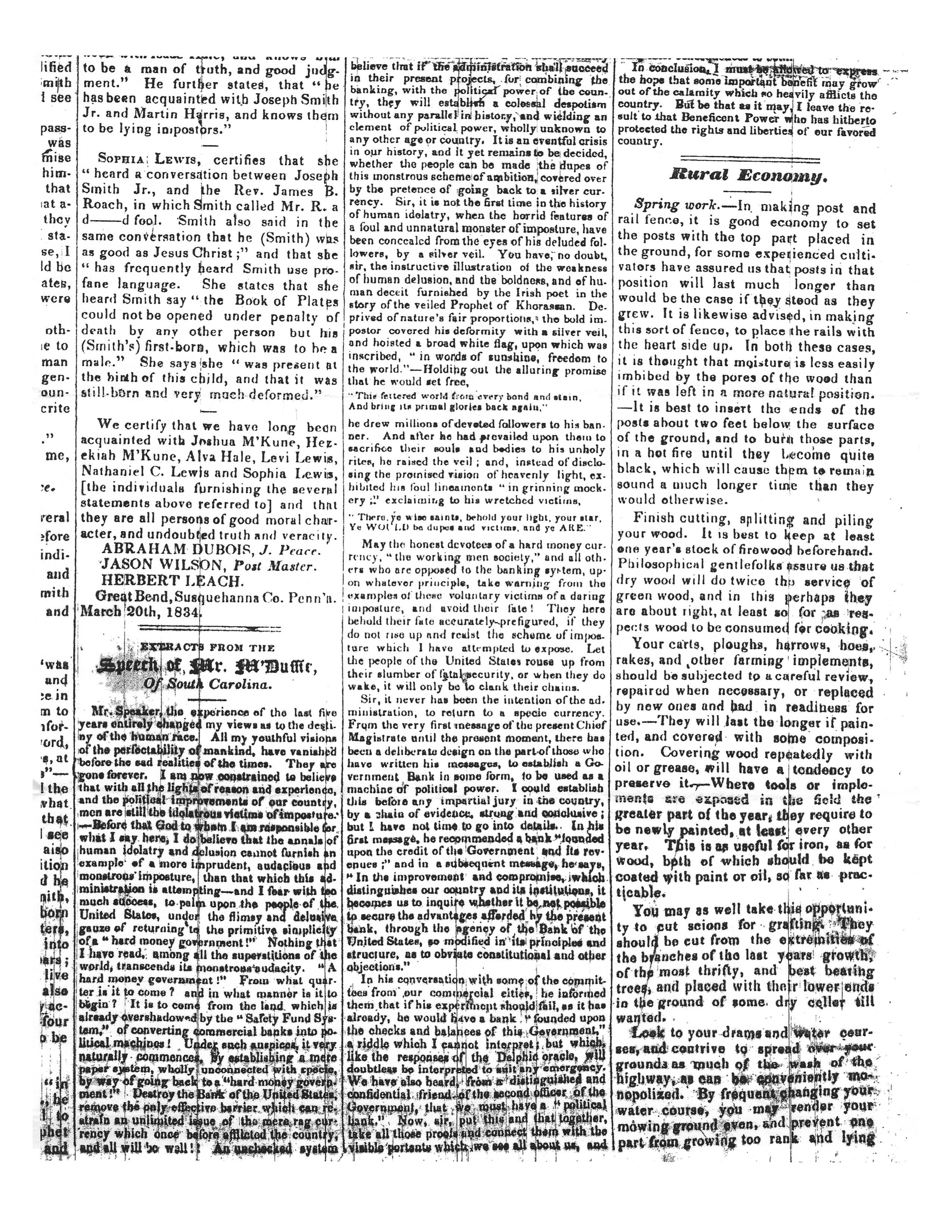