As outlandish as the story of Noah and the ark is, the journey of the Jaredites in the Book of Mormon is even more bizarre. As the story unfolds, the brother of Jared is commanded by The Almighty to construct eight barges in which to travel to America: The Promised Land. Under God’s direction, they were to be made tight like unto a dish and the length of a tree. They were to be air-tight; without windows.

An obvious anachronism about windows can be found in Ether 2:23…

“And the Lord said unto the brother of Jared: What will ye that I should do that ye may have light in your vessels? For behold, ye cannot have windows, for they will be dashed in pieces.”

If the purported timeline is correct, the suggestion to avoid glass windows was not only wise counsel, it was also impractical since glass windows, and/or wooden shutters, would not be invented for another 1,000+ years.

Once the journey began, steering was impossible, so the barges were carried swiftly across the raging waters for 344 days…

At three knots per hour, they would have traveled farther than the circumference of the earth in 344 days. Thus, the wind that “did never cease to blow” and was “furious” blew them VERY slowly across the waters. 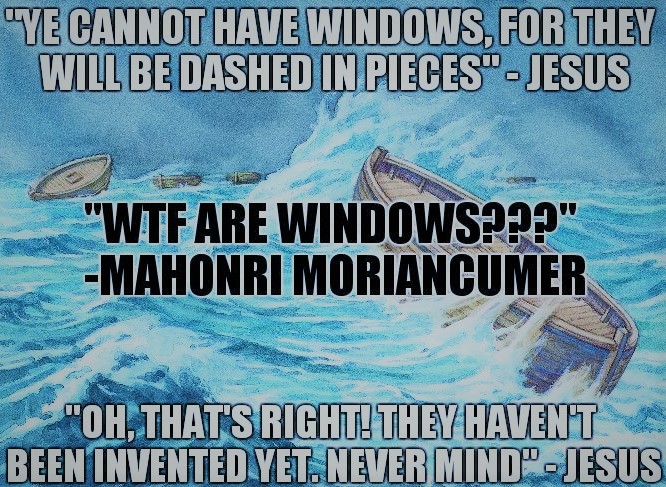