In general, but not always, there appears to be a psychological deterrent attached to the “smell” of particular vices with some Mormons. Understandably, Tobacco and Marijuana are repulsive to them because of their pungent nature. One could also give the TBM [True Believing Mormon] a pass on the smell of alcohol because of it’s strong scent. However, I’ve know many people (mostly non-LDS) who not only like the smell of these three things, but absolutely adore them.

Admittedly, I am a fan of certain types of aromas coming from a pipe, and, the smell of certain types of weed produce a kind of euphoria in me. And there are certain meals that simply would not be the same without the addition of alcohol…then again, I was a convert to the church.

Yes, there seems to be a negativity button built into the TBM regarding these fragrances, triggering an emotional smelling ‘frequency’ which is enhanced above the nostrils of the average outsider.

In no place can this be more commonly noticed than with the smell of coffee. In some cases, I’ve noticed it being as repulsive to some Mormons as the scent of tobacco. So much so, that I know of an LDS Salt Lake business owner who won’t allow a coffee pot in the break room; claiming he gets physically nauseous at the smell of Joe.

My non-LDS parents owned two restaurants while I was growing up. They tried their best to keep all the kids away from coffee until we were about ten years old. After that, it didn’t seem to be an issue. Converting when I was fifteen, I found that giving up coffee was harder to give up than most things; and like the priesthood ban on blacks, I couldn’t wrap my head around the fact that it was divine…which, of course, it was not.

The temperance movement was gaining steam in the early 1800s. This was a grassroots movement that was primarily aimed at encouraging people to use extreme moderation in alcohol, as well as certain moral issues. In 1826 “The American Temperance Society” was formed. This coincided nicely with the beginnings of Mormonism.

Generally, when the men of the Church met to discuss religious matters, the women would meet in a different room socially for tea and coffee.

Joseph Smith’s first wife, Emma, usually cleaned up after the men’s meeting. Chewing tobacco covered the floor and Emma complained about it to Joseph.

Founding church member, David Whitmer, recounted the scene during an interview for an Iowa newspaper:

“[Q]uite a little party of the brethren and sisters being assembled in Smith’s house. Some of the men were excessive chewers of the filthy weed, and their disgusting slobbering and spitting caused Mrs. Smith (who, Mr. Whitmer insists, was a lady of predisposed refinement) to make the ironical remark that ‘It would be a good thing if a revelation could be had declaring the use of tobacco a sin, and commanding its suppression.’ The matter was taken up and joked about, one of the brethren suggesting that the revelation should also provide for a total abstinence from tea and coffee drinking, intending this as a counter ‘dig’ at the sisters. Sure enough the subject was afterward taken up in dead earnest, and the ‘Word of Wisdom’ was the result.”

The ill effects (if any) of coffee and tea are easily negated by the beneficial properties of some of these drinks. Even so, they’re treated by the TBM as a gateway drug to ‘worse’ vices. As if, by taking a drink of coffee, you might as well begin shooting heroin.

All of this is particularly sad, given the fact that LDS scripture about it is based on a prank. 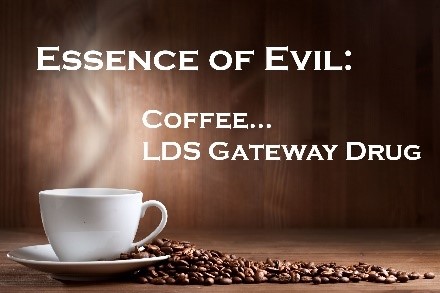