“I found something interesting today. The church is doing its best to hide a talk by Elder Packer. If fact, as of November 2016 they’ve discontinued publishing it entirely. There was a talk given in 1976 entitled ‘To Young Men Only.’ This title has been changed to ‘Message to Young Men.’ Also, if you search ‘To Young Men Only’ on LDS.org you will find no reference to the 1976 talk. What I found even more alarming is if you look up the 1976 General Conference all the talks have video plus text except one, that one being Elder Packer’s Priesthood session talk now named Message to Young Men. Why would they rename this talk, and remove the text? The easy answer is to make it harder find. They can’t get rid of it completely, but they don’t want their members finding it, so they just hide it. The dishonesty continues. If you were wondering what makes this talk interesting, it is this little quote towards the end that condones hitting gays.”

“After patient encouragement he finally blurted out, ‘I hit my companion.’

“After learning a little more, my response was ‘Well, thanks. Somebody had to do it, and it wouldn’t be well for a General Authority to solve the problem that way.’

“I am not recommending that course to you, but I am not omitting it.”

“What is even more saddening is that while he shares this experience the congregation laughs multiple times. Missionaries today will tell you the church never taught to treat homosexuals differently and have always taught to love them. Does that sound like love? I can’t blame the missionaries that told me that, the church has hidden the evidence to the contrary and sold them a whitewashed version of the church’s teachings with regards to the LGBT community. The church can’t stop being dishonest with its history, sure they will say it was always there, but it is not there in the same context as the other talks. No text and a name change, all evidence points to hiding it without erasing it.” 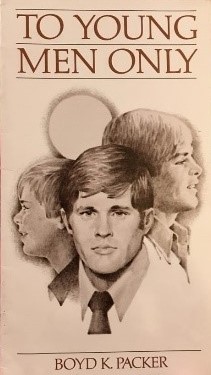