2 July 2016 – Misty Snow has just received the nod for the Democratic bid for Senate, running against ultra conservative, right wing extremist Mike Lee. Misty is transgendered, which is a historic victory for Utah voters. In the wake of people giving honest congratulations and support to her march, there have also been a high number of critics.

Unfortunately, their vitriol is focused on her sexuality, and not her politics. It is disheartening to read a FB post about a Salt Lake Tribune article that warns “avoid reading the comments section.” It is no secret to most of the world that the base of Utah voters is both Republican and Mormon – a lethal combination. Especially against someone like Misty. Mormons are quick to remind onlookers they are ‘Indeed Christian’ (I mean, look at the size of the words ‘Jesus Christ’ in their logo!), yet, when it comes to something as basically Christian as Love Thy Neighbor, or The Golden Rule, all is tossed out when the person lives outside of their box. To be fair, many so-called real die-hard Christians are not much better.

It is troubling to know how one sided their compassion is. If a ward member’s home is flooding, there will be an excess of help available, but if the same thing happens and you are Gay or Transgendered, good luck locating Christ in that setting.

UPDATE November 2016: Ultimately, Misty lost her bid against Mike Lee, with only 27.4% of the vote. It is nonetheless encouraging that nearly 230,000 Utah votes went her way! 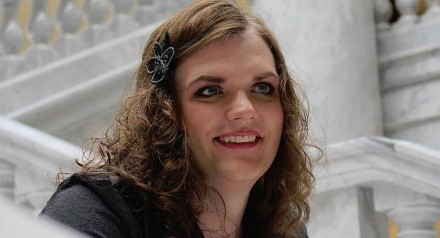