Many have questioned why the grip of Mormonism is so powerful. The faithful would have you believe it is because the religion is everything it claims to be – the restored gospel of Jesus Christ. Others might say it is clean living and a dedicated life of service. Some claim it is the Book of Mormon. Even those of us who choose to no longer believe the tenets find it difficult to abandon the church, particularly the “good” aspects we have learned throughout our lives.

I propose the real reason is none of the above, and that a careful, deep, and sincere look into the mechanics of what I am about to pen will put a new perspective on the WHY. It is no surprise my posts are edgy, and some have accused me of focusing on the negative rather than positive aspects of the religion. To which, I confess to being guilty as charged, as I feel the church has the upper-hand on accentuating the positive, with healthy bankrolls and missionary programs – no reason for me to help them there – rather, to give balance to the discussion.

The survival of the Church of Jesus Christ of Latter-day Saints does not owe its good fortune on how wonderful it might seem to be. No, it is just the opposite. The single-most influential reason it thrives, is nothing less than the “Blood Oaths” made in the temple through the years.

This might come as a shock to any who attended the temple for the first time post-1990, as the more gruesome aspects of the ceremony were either removed or greatly toned down since then. Please indulge me.

The temple ritual began in a vastly different way than it appears in the 21st century. Washings and anointings were done while immersed in tubs. The theatrics were performed live in a “road show” manner which included choirs singing “Rock of Ages” – mocking Christianity, and Satan slithering into the creation room on his belly. Ministers were depicted as agents of the devil; making money for corrupting the souls of men. Brigham Young made certain the Adam-God concept played a prominent role. An oath was made to avenge the blood of Joseph and Hyrum. The markings were cut into the garment with a knife when it was donned for the first time, and the implications for breaking covenants were far more severe.

In this atmosphere, the faithful thrived and felt compelled to live accordingly, since this small grouping of people existed beyond most of the scope of the government, and pioneer justice was executed in clandestine ways.

But what of these “Blood Oaths?”

While presenting the signs and tokens in various ways of arm waving and handshakes, the participants were additionally bound to the religion via “penalties” which showed various ways your life could be taken for revealing them outside of the sacred walls. These included representations of death: throat slitting, vivisection, and disembowelment. Early on, it included having our “tongue torn out by its roots” and our breasts “torn open, our hearts and vitals torn out and given to the birds of the air and the beasts of the field.”

It must be remembered that these “penalties” were effective scare tactics to keep members “in line,” and they were prominent in the ceremony until 1990. Until that point, the ceremony had evolved to exclude many of the aspects listed above, but the blood oaths of throat slitting, vivisection, and disembowelment were still active. I should know, since I attended the temple no fewer than 200 times prior to 1990.

How many of our friends, loved ones, relatives, political leaders, and business associates made these same blood oaths as a security deposit for their mortality and eternal salvation? Well, it was ALL who entered the walls prior to 1990. For many of us this means that every person we encountered daily was bound by these oaths, even if we had no clue about it prior to our own attendance. Yes, it was EVERY active Latter-day Saint who ever walked through the walls of the temple. Every person mimicked the practice of throat slitting, by placing their right thumb under their left ear and then quickly drawing it over the throat to the right ear. Can you imagine the impact this had on millions of people over 150 years in our religious social group? It is silly, but though I’ve been out of the church since 1997, I STILL find myself watching my back for explaining these truths – certain the Lord will slay me.

I maintain that blood oaths were the single most important tactic used to steer the faithful into submission and to willingly serve, paint on a happy face, and open wallets freely to the cause – just so we could proudly watch our children make the same covenants, and live in fear of retribution – whether it was by the hand of man or the justice of God. To say that anyone has come away from this mentally unscathed in any way is not understanding the commitment it took to remain in good standing. 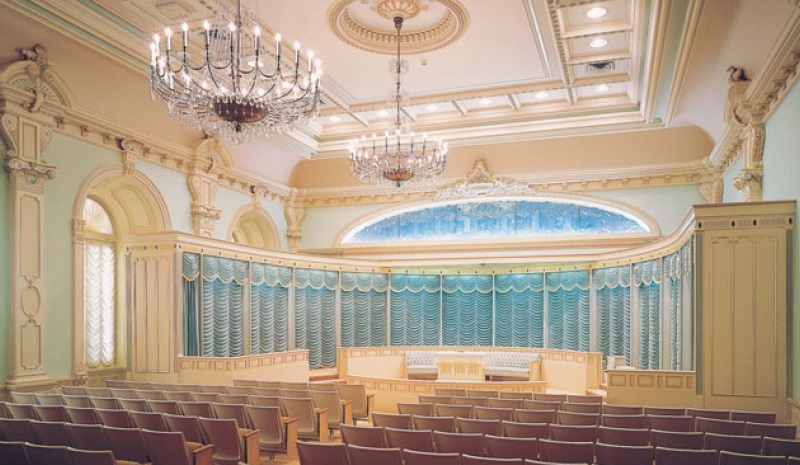