This should be a reason to NOT dismiss Mormonism, but the sentiment is no longer practiced, nor is it apparent it ever existed…

“We have heard men who hold the priesthood remark, that they would do any thing they were told to do by those who presided over them, if they knew it was wrong: but such obedience as this is worse than folly to us; it is slavery in the extreme; and the man who would thus willingly degrade himself, should not claim a rank among intelligent beings, until he turns from his folly. A man of God, who seeks for the redemption of his fellows, would despise the idea of seeing another become his slave, who had an equal right with himself to the favour of God; he would rather see him stand by his side, a sworn enemy to wrong, so long as there was place found for it among men. Others, in the extreme exercise of their almighty (!) authority, have taught that such obedience was necessary, and that no matter what the Saints were told to do by their Presidents, they should do it without any questions.

“When the Elders of Israel will so far indulge in these extreme notions of obedience, as to teach them to the people, it is generally because they have it in their hearts to do wrong themselves, and wish to pave the way to accomplish that wrong; or else because they have done wrong, and wish to use the cloak of their authority to cover it with, lest it should be discovered by their superiors, who would require an atonement at their hands.” 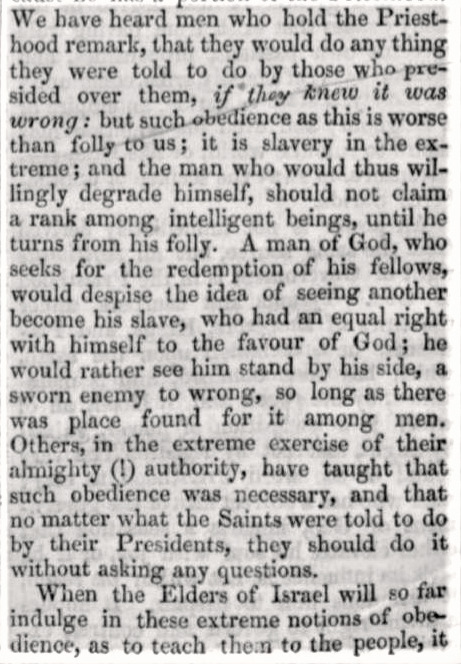