As a prelude to the Book of Mormon introduction of Korihor – the Anti-Christ, we’re treated to a peculiar insight into Mormonism, which might help explain why the church sometimes acts as if they’re above the law when it comes to judgment. It also reveals an obvious conflict in the story, which is difficult to explain away.

The early verses of Alma 30 describe the openness the society has; with not just a ‘tolerance’ for diverse religious feelings, but an ‘acceptance’ for every way of life…

We read the words of Korihor for the first time in verse 13. Evidently, the liberal nature of his teachings sparked an immediate sexual response from the people who liked what he had to say; particularly the women, but the men are also mentioned.

It seems clear that the unspoken law was that it is perfectly fine to believe what you wanted to, unless it prompted people toward actions which were not in harmony with the Church; an all too familiar echo in the new millennium.

For no apparent reason (other than spite) “they took [Korihor], and bound him” (vs 20), and presented him to the high priest. What part of the law justified this kind of behavior? Was it only OK to preach to the people if they didn’t begin to think for themselves and choose a life which was not Church approved? How could this sort of Marshal Law be justified in the words of Joseph Smith? Does this not foreshadow the type of subtle oppression the modern religion exemplifies? Do the faithful simply look past the law even if the non-believer is treated harshly?

This is an obvious error in Joseph Smith’s dictation, yet it has never been corrected, and has played a significant role in unrighteous dominion throughout LDS history. 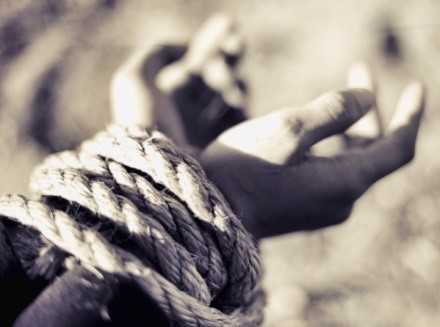