“If, after a rigid examination, it [the Book of Mormon] be found an imposition, it should be extensively published to the world as such; the evidences and arguments on which the imposture was detected, should be clearly and logically stated, that those who have been sincerely yet unfortunately deceived, may perceive the nature of the deception and be reclaimed, and that those who continue to publish the delusion, may be exposed and silenced, not by physical force, neither by persecutions, bare assertions, nor ridicule, but by strong and powerful arguments – by evidences adduced from scripture and reason. Such, and such only, should be the weapons employed to detect and overthrow false doctrines – to reclaim mankind from their errors – to expose religious enthusiasm – and to put to silence base and wicked impostors.” 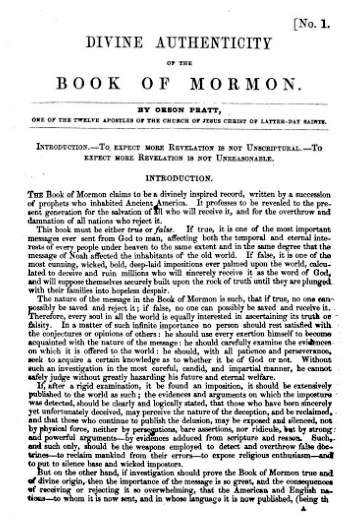