The Gay Agenda is a tiresome term; which is also over-used, and frankly, non-existent.

Ms. Smith exhibits the disturbing trait found in many active Mormons: When feeling misunderstood, double-down on the Church, explain your compassion, and perhaps the masses will overlook your shallowness. She should have simply stopped at “Gender matters very little to children” as an excellent example of how we should be. Instead, she launches into a tedious explanation (and personal justification) about how not every person who is gay is “born that way.” To which I can honestly say: I see no problem in people experimenting with their sexuality. What better way to determine your preferences than to act on them. I’m not advocating promiscuity or even voyeurism, but I’m not condemning it either. The fact remains that there is a (usually small) percentage of most species who are naturally born homosexuals; this seems to be the issue the religious conservative world seems reticent to admit to. However, the right to choose your sexuality is as important as it is for the natural-born gay person to be acknowledged correctly. It’s none of our business to interfere in the bedrooms of someone else; it only breeds animus.

Here is the complete article:

“Why I Wrote the Article on Teaching Heterosexuality and Do I Regret it?”

The other day my grandchildren were arguing. “Juni is a girl,” claimed my six-year-old granddaughter. “No, Juni is a boy,” insisted her four-year-old brother. The argument continued until the four-year-old sought the truth from his mother: was the two-year-old sibling he had been playing with gleefully since infancy a boy or a girl? Mom shattered the little boy’s illusions: “Juni is a girl,” she revealed. “Him’s a girl????” he queried. “But she has short hair.”

Gender matters very little to children: a playmate is a playmate. Children simply care that their playmate shares toys and refrains from biting. But it is our job as parents to educate our children the best we can. No information can be as harmful as misinformation.

I spoke up about homosexuality because I noticed a phenomenon that was being silenced. I have been watching and listening to the dogma that all gays are “born that way” and that none of them has an alternative. I felt like the little boy in the Emperor’s New Clothes. Did everybody believe that all gays are alike, that there is no variation in etiology? That’s not what I saw in my practice as a therapist.

I was seeing, with my own eyes, people who admitted that they were not born gay but acknowledged that they just wanted to give homosexuality a try. It seems to be in vogue, an expression of our times.

The political cry which has worked effectively to further the homosexual agenda is that same-sex attracted people are “born that way”. Science has not verified that and the cause of same-sex attraction may never be entirely known, but the suspicion that biology may play a role has been a long time coming. For too long people assumed homosexuality was entirely behavioral. However, in an effort to acknowledge the biological nature of homosexuality, the pendulum has recently swung to the opposite extreme. Logic demands that the truth lies somewhere between these two extremes.

The most recent research has concluded that “only about 2 or 3% of people are truly exclusively homosexually attracted, another 7 or 8% could go either way depending on the cultural narrative or lived opportunities open to them.” It was the 7-8% that I hoped to reach in my article.

Uninformed parents were buying the argument that homosexuality is always biological and there’s nothing anybody can do about it, period. People thought the 8% were the 2%. This confused parents into thinking they didn’t have to guide, and educate and provide choices for any child who might be considering homosexuality. Nobody was calling out those who did have a choice. I felt like this was unfair to both the 2-3% and the 7-8%. Not all homosexuals are alike, any more than all heterosexuals are alike. There are obviously individual differences in the homosexual community.

I am empathetic toward the homosexuals I have worked with professionally, as well as toward those I am friends with. I am distressed when I hear them lament about the way they have been treated by society. It makes me weep when I hear how parents shamed children for un-deviant, innocuous childhood behavior.

When youth came into my office who were ambivalent, youth who were confused, youth who were considering experimentation, I wanted to protect them from the grief they could experience in their lives should they choose a homosexual lifestyle. I anticipated, not only the persecution they may encounter, but more importantly, I understood fully the blessings they would forego. I have had the same trepidation for heterosexual adolescents who enter into romantic relationships that are destined for heartache, thus my history of writing and speaking to parents about how to keep adolescents out of premature romantic relationships. I want these people for whom I care to find happiness.

I am convinced a loving relationship can bring the most joy of anything on this earth: more satisfying than winning a tournament or a race, more exhilarating than mountain climbing or skydiving, more satisfying than high quality dark chocolate. A loving relationship between husband and wife, parents and children, is the ultimate quest in this life.

The homosexuals I work with often feel “cheated” that they are unable to enjoy the delights of a traditional marriage and they want to replicate it as best as they can, thus the quest to legalize gay marriage, and gay adoption.

Why were kids choosing a homosexual lifestyle when they didn’t even have to? Did they know what they were in for? Did they know what they were giving up? Why would people subject themselves to unnecessary heartache? It’s not just me who thinks that marriage to someone with whom you can bear children is ideal. People generally adopt after learning they can’t have children of their own. They access infertility treatments when natural methods of conception don’t work. Few choose adoption before ever considering natural conception, or opt for in-vitro fertilization even though it’s entirely possible for them to conceive a child naturally.

I wished those homosexual men who have sobbed on the sofa in my office could have been happy! I wished I could have spared them from unnecessary pain. I have gone to inordinate extremes to protect homosexual clients from the ire of their parents. If somebody could have protected all those who have been hurt, they should have done so!!! If merely refraining from criticism and shame would have spared their feelings, I wish I could turn back time and block all criticism and shame. Additionally, those who were merely experimenting should not have been told they were doomed to a fate over which they had no control. Someone should have offered them hope.

I wish I hadn’t had to write the article. Someone had to. It was not fair to those gays who did have a choice, to those who didn’t believe their condition was biological to be lumped in with a cohort to which they didn’t belong.

I wish I hadn’t been the one to write it. But I can understand why nobody wants to disagree with the gay agenda. There is a systematic campaign to silence anybody that disagrees with them. The words that were used in the letters to describe me cannot even be repeated in polite company. The scathing attacks I experienced were so abusive a judge in a court of law would have slammed his gavel. It has been very painful to be so brutally bullied.

It is ironic to me that these gay individuals complain so loudly about having been bullied for their sexual orientation, and turn around and bully me for caring. I bear no ill will because I am very aware of the tendency for the abused to become the abuser. It makes them feel powerful after having felt so powerless. But it’s wicked. No human being should be treated with such disdain or contempt. They shouldn’t have been treated like that by society, and they should not be treating me the same way.

But if anybody was to stand up and correct the politically correct, it might as well have been me. This is not the first time I have dared expose the naked emperor. When Facebook first came out I had the audacity to pose questions about potential abuses. I received scathing responses from those who thought Facebook was the best thing to happen to humanity since the invention of fire. Of course a few years later everybody validated my concerns and my ideas were not revolutionary in the least.

My entire career I have questioned the merit of the mom-and-apple-pie rite of passage known as “high school romance.” I have relentlessly worked to help adolescents keep their relationships at the friendship level until they are in a position to actually do something with their loving relationships. While many have caught on and embraced the wisdom of these teachings, even my best friend once accused me of being too extreme.

In the controversial article I differentiated several times between those who see themselves as born gay from those who have a choice (who are experimenting). But I wish I had focused the article exclusively on those who are experimenting. I addressed the dilemma of the 2-3%, reiterating the church’s stance on abstinence, trials, overcoming the natural man, etc. But that is a discussion to be reserved for ecclesiastical leaders. My area of expertise is the 7-8%, those who are being influenced by a society where anything goes.

My second error was briefly mentioning a few of the techniques we use to shape behavior in general (whether we want our children to stop belching at the dinner table, or to complete their chores before they go out to play). We may model the behavior we want the child to emulate, or we may invite them to visualize the appropriate behavior. But modeling and visualizing are techniques reserved exclusively for the 7-8%, not intended for the 2-3%. Additionally, these techniques just scratch the surface of what it takes to help a child resist the lures of a world who extols an “anything goes” environment. Neither should be perceived as a panacea.

My hope is that my only role in the unnecessary conflict between heterosexuals and homosexuals has been to expose the unclad emperor. I hope others will now have the courage to chime in and get that man some clothes. 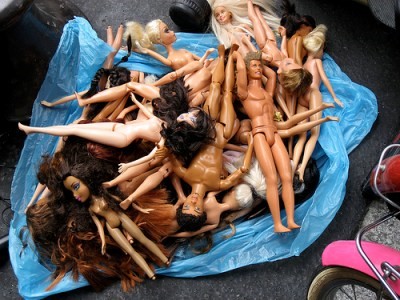