“There are striking differences between the papyrus the LDS Church received in 1967 (which is the original from which the woodcuts were drawn) and Facsimile #1, currently a part of canonized LDS scripture in The Pearl of Great Price – Book of Abraham.

“The Papyrus was received in 1835 and is a typical scene from ancient Egypt known as The Books of Breathing. Joseph Smith had no knowledge of what these writings really were about. He invented the story about ‘The idolatrous priest of Elkenah attempting to offer Abraham as a sacrifice.’ Elkenah is actually the God Anubis, Abraham is Osiris, and the bird is the soul of Osiris rising in the form of a hawk.

“The dating of these images and Sensen are from about 2,000 years after the time of Abraham. Experts have found no indication they have anything to do with Abraham.

“It is still unknown whether Joseph Smith actually drew the alterations himself or if it was one of his scribes. At the very least he supervised and approved it.

“Part of the Mormon Papyrus was damaged with age; Joseph Smith attempted to fill in the missing details. Having no point of reference, he mistakenly assumed the scene had to do with human sacrifice because the headless figure was stretching an arm toward the person on the table. He felt there was enough imagery showing that (what he thought was) the victims hands being held up in defense of the crime.

“The missing pieces which are so damaging to the LDS Church’s misinterpretation of the scene are the Head of Anubis, the knife in Anubis’ hand, and the arms and hands of Osiris. There is also plenty of evidence the hawk should have a human head.

“The head of Anubis is always depicted as that of a Jackal. In reconstructing the head on this figure, Joseph Smith basically copied what he saw of Osiris’ head. Anubis is traditionally drawn as a black man, so why did Joseph draw him with the head of a white man?

“There are no known scenes from the varieties of the Books of Breathing that show Anubis with a knife. The interpretation of a knife is inconsistent with other papyrus from this period.

“Some speculate that Osiris’ hands are actually reeds (or something similar) being waved over the head/body by Anubis. This is based on the distance and positioning of Anubis’ arm to the reeds which seems very natural. Additionally, Osiris’ digits do not resemble human-like fingers at all.” 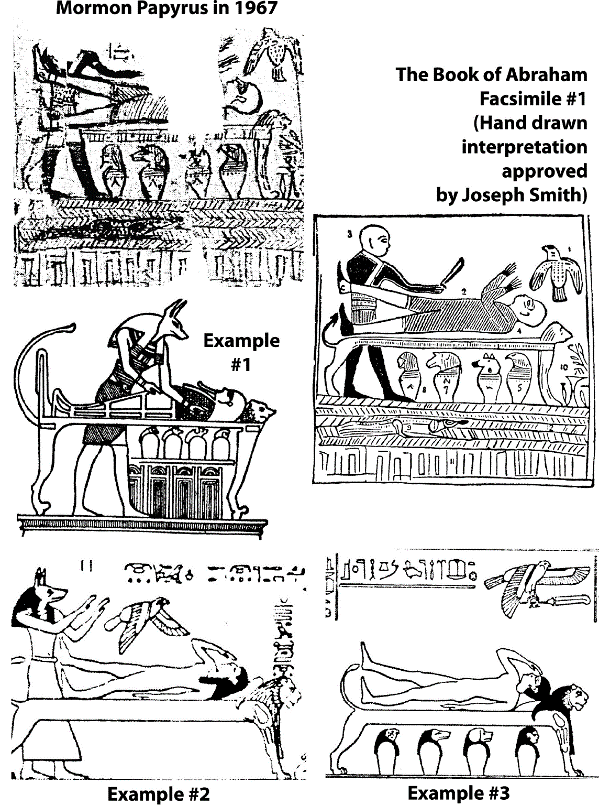