“I married Jesse Hartly, knowing he was a ‘Gentile’ in fact, but he passed for a Mormon, but that made no difference with me, although I was a Mormon, because he was a noble man, and sought only the right. By being my husband, he was brought into closer contact with the members of the Church, and was thus soon enabled to learn many things about us, and about the Heads of the Church, that he did not approve, and of which I was ignorant, although I had been brought up among the Saints; and which, if known among the Gentiles, would have greatly damaged us. I do not understand all he discovered, or all he did; but they found he had written against the Church, and he was cut off, and the Prophet required as an atonement for his sins, that he should lay down his life. That he should be sacrificed in the endowment rooms; where human sacrifices are sometimes made in this way. This I never knew until my husband told me, but it is true. They kill those there who have committed sins too great to be atoned for in any other way. The Prophet says, if they submit to this he can save them; otherwise they are lost. Oh! that is horrible. But my husband refused to be sacrificed, and so set out alone for the United States: thinking there might be at least a hope of success. I told him when he left me, and left his child, that he would be killed, and so he was. William Hickman and another Danite, shot him in the can[y]ons; and I have often since been obliged to cook for this man, when he passed this way, knowing all the while, he had killed my husband. My child soon followed after its father, and I hope to die also; for why should I live? They have brought me here, where I wish to remain, rather than to return to Salt Lake where the murderers of my husband curse the earth, and roll in affluence unpunished.” 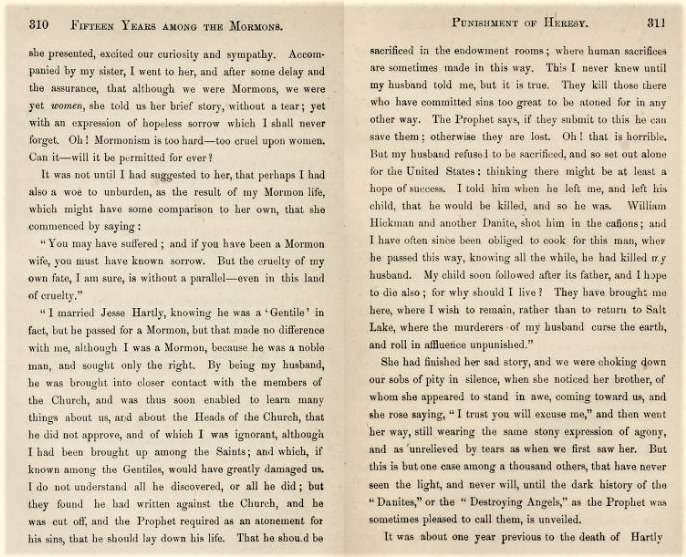