“One day they came both, Joseph and [Doctor] Bennett, on horseback to my house. Bennett dismounted, Joseph remained outside. Bennett wanted me to return to him a book I had borrowed from him. It was a so-called doctor-book. I had a rapidly growing little family and wanted to inform myself about certain matters in regard to babies, etc., – this explains my having borrowed that book. While giving Bennett his book, I observed that he held something in the left sleeve of his coat. Bennett smiled and said: ‘Oh, a little job for Joseph; one of his women is in trouble.’ Saying this, he took the thing out of his left sleeve. It was a pretty long instrument of a kind I had never seen before. It seemed to be of steel and was crooked at one end. I heard afterwards that the operation had been performed; that the woman was very sick, and that Joseph was very much afraid that she might die, but she recovered.”

Sarah Pratt, Joseph Smith the Prophet: His Family and Friends: A Study Based on Facts and Documents (Salt Lake City, Utah: Tribune Printing and Publishing Company, 1886), 61-62. 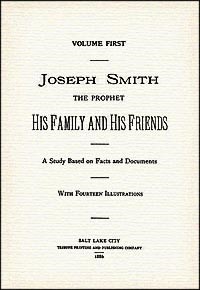