“Any effort or desire on the part of a married couple to shirk the responsibility of parenthood reflects a condition of mind antagonistic to the best interests of the home, the state and the nation. No doubt there are some worldly people who honestly limit the number of children and the family to two or three because of insufficient means to clothe and educate a large family as the parents would desire to do, but in nearly all such cases, the two or three children are no better provided for than two or three times that number would be. Such parents may be sincere, even if misguided; but in most cases the desire not to have children has its birth in vanity, passion, and selfishness. Such feelings are the seeds sown in early married life that produce a harvest of discord, suspicion, estrangement, and divorce. All such efforts, too, often tend to put the marriage relationship on a level with the panderer and the courtesan. They befoul the pure fountains of life with the slime of indulgence and sensuality. Such misguided couples are ever seeking but never finding the reality for which the heart is yearning.” 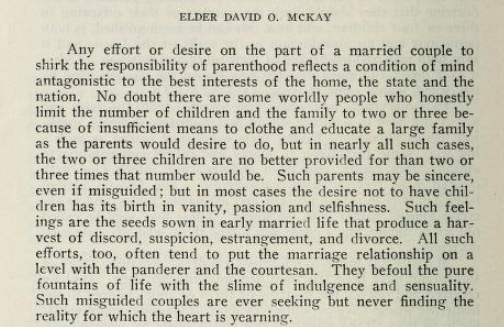