“Being called upon to give a statement to the world of what I know respecting the Gold Bible speculation, and also of the conduct of Martin Harris, my husband, who is a leading character among the Mormons, I do it free from prejudice, realizing that I must give an account at the bar of God for what I say. Martin Harris was once industrious attentive to his domestic concerns and thought to be worth about ten thousand dollars [2021 = abt $300,000]. He is naturally quick in his temper and his mad-fits frequently abuse all who may dare to oppose him in his wishes. However strange it may seem, I have been a great sufferer by his unreasonable conduct. At different times while I lived with him, he has whipped, kicked, and turned me out of the house. About a year previous to the report being raised that Smith had found gold plates, he became very intimate with the Smith family, and said he believed Joseph could see in his stone any thing he wished. After this he apparently became very sanguine in his belief, and frequently said he would have no one in his house that did not believe in Mormonism; and because I would not give credit to the report he made about the gold plates, he became more austere towards me. In one of his fits of rage he struck me with the but[t] end of a whip, which I think had been used for driving oxen, and was about the size of my thumb, and three or four feet long. He beat me on the head four or five times, and the next day turned me out of doors twice, and beat me in a shameful manner. The next day I went to the town of Marion, and while there my flesh was black and blue in many places. His main complaint against me was that I was always trying to hinder his making money.

“When he found out that I was going to Mr. Putnam’s, in Marion, he said he was going too, but they had sent for him to pay them a visit. On arriving at Mr. Putnam’s, I asked them if they had sent for Mr. Harris; they replied they knew nothing about it; he, however, came in the evening. Mrs. Putnam told him never to strike or abuse me any more; he then denied ever striking me; she was however convinced that he lied, as the marks of his beating me were plain to be seen, and remained more than two weeks. Whether the Mormon religion be true or false, I leave the world to judge, for its effects upon Martin Harris have been to make him more cross, turbulent and abusive to me. His whole object was to make money by it. I will give one circumstance in proof of it. One day, while at Peter Harris’ house, I told him he had better leave the company of the Smiths, as their religion was false; to which he replied, if you would let me alone, I could make money by it.

“It is in vain for the Mormons to deny these facts; for they are all well known to most of his former neighbors. The man has now become rather an object of pity; he has spent most of his property, and lost the confidence of his former friends. If he had labored as hard on his farm as he has to make Mormons, he might now be one of the wealthiest farmers in the country. He now spends his time in traveling through the country spreading the delusion of Mormonism, and has no regard whatever for his family.

“With regard to Mr. Harris’ being intimate with Mrs. Haggard, as has been reported, it is but justice to myself to state what facts have come within my own observation, to show whether I had any grounds for jealousy or not. Mr. Harris was very intimate with this family, for some time previous to their going to Ohio. They lived a while in a house which he had built for their accommodation, and here he spent the most of his leisure hours; and made her presents of articles from the store and house. He carried these presents in a private manner, and frequently when he went there, he would pretend to be going to some of the neighbors, on an errand, or to be going into the fields. After getting out of sight of the house, he would steer a straight course for Haggard’s house, especially if Haggard was from home. At times when Haggard was from home, he would go there in the manner above described, and stay till twelve or one o’clock at night, and sometimes until day light.

“If his intentions were evil, the Lord will judge him accordingly, but if good, he did not mean to let his left hand know what his right hand did. The above statement of facts, I affirm to be true.” 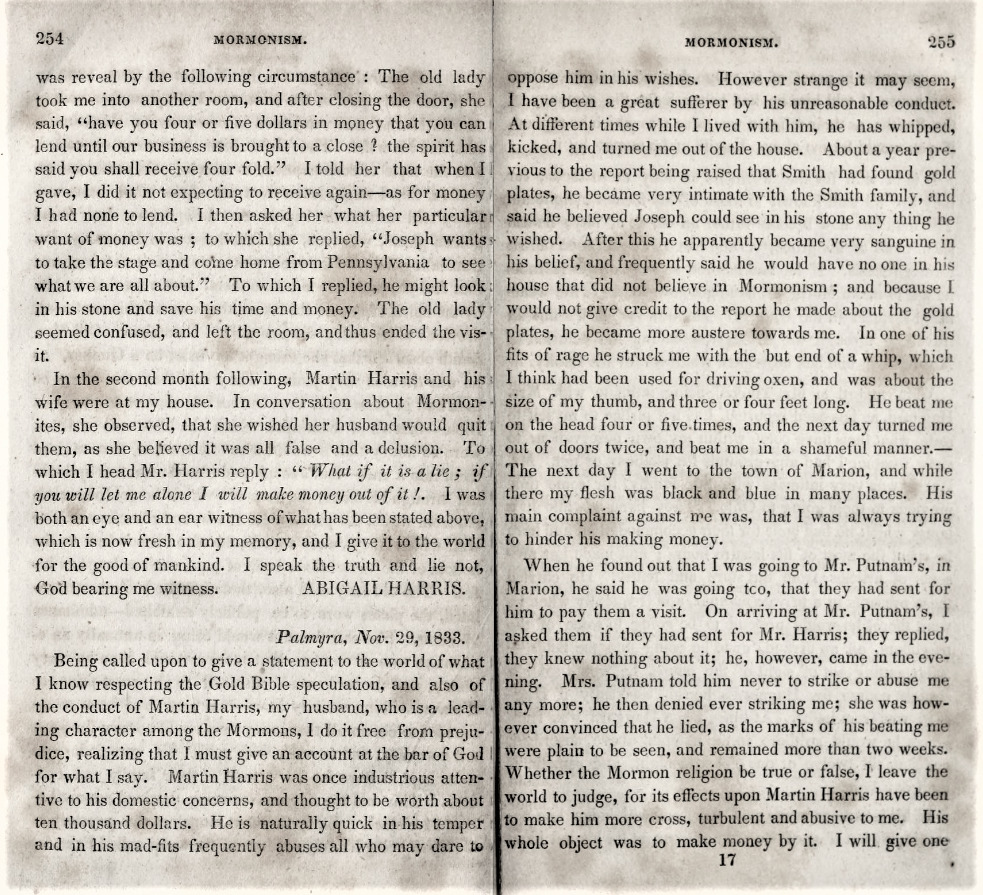